Tickets available at the information desks in the Old Brewery's Arcade and Atrium, and at ebilet.pl

Tickets available at the information desks in the Old Brewery's Arcade and Atrium an at ebilet.pl
Reduced price: 10 PLN
Regular price: 15 PLN

The title of the piece expresses the idea to use dance as a tool to tell specific stories of human life. The project searches a common ground between the need to preserve the abstract nature of the movement language and the specific narrations coming from characters created by the performers. Those characters are storytellers, masters of ceremony, comedians, clowns, or combinations of such cliché figures, who are culturally given permission both to amuse and to preach to the audience. This happens mostly by sublimation of their own, personal experience, stored in their physicality. 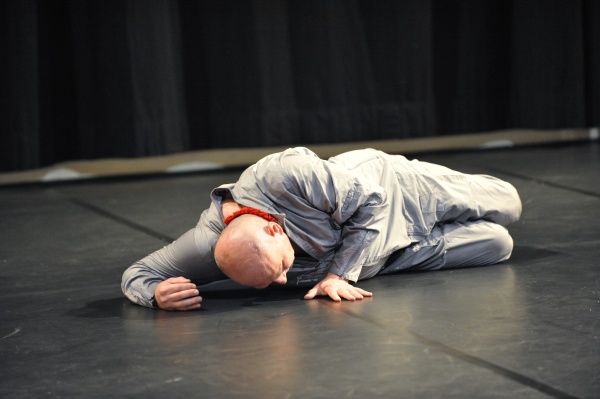 Rafał Dziemidok (1971) is a dancer, actor and choreographer. He danced with Dada von Bzdulow (Gdańsk), Gdański Teatr Tańca, Compagnie Yvette Bozsik (Budapest). Since 1997 he has worked independently. Rafał was awarded at choreographic competitions in Kalisz (1999 for Departure- Arrival) and in Warsaw (2000, for Heart of Welding Machine). Furthermore, he was selected for the first Polish Dance Platform (2002, with Arrow of Time), is a holder of Ministry of Culture and National Heritage scholarship (2007) and in the questionnaire of nowytaniec.pl was nominated Polish dancer of the year (2008). Apart from making his own projects, he choreographs and performs in theatre, opera and film. Rafał is a cofounder of KONCENTRAT Artistic Group (since 2005). Koncentrat AG // www.koncentrat.com

Ewa Garniec (80's) is a light designer. For several years she has been working with theatre light in Poland and abroad. Ewa worked with Teatr Rozmaitosci (TR Warszawa) designing lights for concerts, exhibitions and theatre performances. She was an assistant to one of the world's most famous light designers, Felice Ross. As the most inspiring she considers working with Grzegorz Jarzyna, Anna Augustynowicz, Grazyna Kania and Michal Zadara. Since 2004 she has been working with Theatergroup TRAVA. In 2005 Ewa was invited to the Interdisciplinary Laboratory for Choreographers: Jagniatkow Move The mount. Ewa is a cofounder of KONCENTRAT Artistic Group (since 2005).

Petra Korink is a stage and costume designer. She was born in Hengelo/NL and studied textile design at the Akademie voor industriele vormgeving in Eindhoven/NL and stage design at the Hochschule für Bildende Künste in Hamburg. She worked together among others with Ute Rauwald, Willibrord Keesen, Christoph Schlingensief, Katka Schroth, Monika Dobrowlanska, Ernst Stötzner and Inga Levant. Her work took her to venues like the Schauspielhaus Bochum, Bremer Theater, Berliner Volksbühne, Noord Nederlands Toneel Groningen/ NL, Opera Poznan/PL, Deutsches Theater Berlin and Saarländisches Staatstheater.