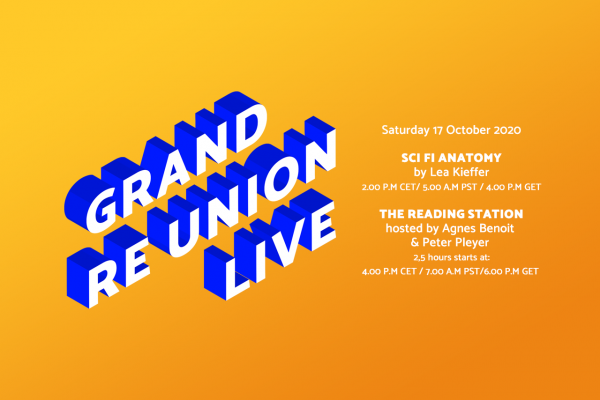 As a slogan for this issue, I propose „Liquefaction“ / waves of change.

I never heard of that word before, as I am not a native English speaker, it is the translation of the German word „Verflüssigung“, and that is a title of a book by Adrienne Goehler, a german writer and political player in the cultural field. In 2001 she has been the cultural senator for Berlin for a short time when the government of Berlin was a coalition between the green party and the german labour party.

Already then she was fighting for a basic income structure for everyone, and in her book „Verflüssigungen“ (2006) she writes about how it can hugely benefit the cultural sector and with that society at large.

I did pull it out from my bookshelf to re-read it in our times of liquefaction, times where structures dissolve and crumble through constant waves of change that are rolling and retreating repeatedly onto and against the stable fundaments of patriarchy, like breathing, in and out, and in and out. So that slowly and with insistence, the concrete fundaments and structures that are fixed and not moving at all, the walls and dams that hinder the flow or want to direct it in one direction only, will want to liquify, more and more.

In the past I have worked for it and taught it, I have insisted in movement as stability, in balance as movement, in change as a constant.

So now, when I see structures liquefying, what do we build to stay safe? what makes us float in the troubling waters?

I think, we  want  structures that are balanced and have enough air in the canisters spread evenly underneath a wide enough platform for us to float. And we want many, different sizes and shapes, to make space for all of us.

The last work I did together with Asaf Ahronson at the Un-Festival in Ponderosa this summer we were playing around with doing the small dance of relaxed upright standing first on land and then on the water. We practiced standing, balancing, with open eyes, allowing our senses to pay attention to the environment outside of us as much as inside, to let what we hear, see, smell change the direction of our heads and bodies, taking us into a dance.

How to do this on water?

It took us many and many tests with floating objects, found materials, wood, and plastic containers, bottles, and swim-rings, stacking one over the other to get enough float to support a standing body.

The forces of the water were unpredictable and we kept falling and diving, but eventually found a combination of constructions that kept us afloat.

I want to see this as a metaphor for the times we are in, I see structures of oppression, structures of power liquifying, but building rafts and floats to stay save on are difficult to build. Let’s keep looking together for what in our work keeps us balanced, afloat, and our heads above water.

I am writing this editorial on the 3rd of October, the German national holiday remembering the re-unification 30 years ago, after a bike ride through Berlin, where I am living for the last 20 years. It gives me great pleasure to ride my bike right through the middle of the Brandenburg Gate, as 100 years ago this was only possible for the Kaiser, then the Nazis used it for many parades, and later it was shut down and heavily armed guarded by the Berlin Wall.

The insisting and repeating mass protest in Leipzig and other cities brought about the change of 1989, peaceful, silent first, then louder, with more and more people every week, the constant waves of change were rolling onto the wall until it fell.

Here and then I met Eva Karczag, Karen Schaffman and Eszter Gál. Eszter from Budapest in Hungary, the country that played such a crucial role in the fall of the Berlin Wall when the authorities opened the fence between Hungary and Austria during a picnic of East-Germans at that border.

It is with this memory of the last 30 years that I have invited Eva, Karen, and Eszter to start the Trio Talk Rhizome that is the main content of the October issue of the Grand re Union. The invitation was to record a zoom conversation between the three of them, a trialogue, talking about the work and times. All three of them working in educational institutions under very different circumstances.

You can listen to them and look at them in this October Issue of the Grand re Union online-magazine.

This workshop focuses on creating a dialogue between the matter of the body and the sea of our thoughts and imagination. Through movement, sounds and words. Working with casual epic-ness, craftsmanship of the body and magic.

A guided somatic trip where the content slides from anatomical references onto the slippery slope of science fiction with no holding back. We use bodywork and storytelling as tools to inspect our narratives of touch (what we touch, how we touch) and ways of imagining the body and physical sensations. Contradiction, otherness and diversity can cohabit, and our realities can melt, shape, reshape and melt again. If reality is a fiction, can we make our fictions a reality?

-Make the space cosy (Blanket and warm clothes) and make sure you can move around a bit (2-4 m2 is enough) more is also good! –

THE READING ROOM
hosted by Peter Pleyer and Agnes Benoit

Agnes Benoit from „books on the move“ and Peter Pleyer invite you to a reading and listening room.

In the first part they will present and read from books that are meaningful to them,

from the past and the present - for the future.

In the second part you are invited to share a reading from a book or a magazine with the group.