with support of
Trust for Mutual Understanding in NYC, Urząd Miasta Gdańska

A silly biped shows a group of unconditional, impulsive behaviours, which could be called an Aversion towards killing [A]. It so happens, however, that some of its original gastronomic (and sexual?) Urges [U] cannot be fulfilled without the killing of members of its own kind, or members of other, related species. In other words, committing deeds, which the biped sincerely hates to commit, is its life's need. This is not a dramatic conflict. This is a conflict, which - the thoughtlessness of the fortune - we cannot avoid. Hence, it is a Tragic [T] conflict.

It might be easier to assume, that the tragic dichotomy is not a relation between the Aversion to killing and the very necessity to kill, but rather, a relation between Fear and Hunger, or between the production of adrenaline and the production of digestive juices., or even the Biblical contradiction of the ban on having children and a simple urge to submit to a sexual act (in which the essence of the story of Eden is contained). This has a secondary meaning. No matter whether the [A]version concerns the killing or risking life in combat and at work, or having children, and whether the need comes down to eating and getting rid of the sperm. Faktor T., the original tragedy, remains unaltered and has to be taken for granted.
Stefan Themerson, Faktor T.

Considering Stefan Themerson's above statement, Dada Theatre transfers it to the post-dramatic theatre arena. After a multitude of decompositional, nonlinear experiences, an Actor discovers a peculiar [A]version to dawdling in life’s conflicts. Following the discovered [A]version, the Actor plunges in the diminution of ego and the exploration of harmony. This particular honesty towards oneself, however, leads to an impotent insignificance, to a passive creation of crippled meanings and, ultimately, to theatrical death.

This could be the point at which this catastrophe might be ended. However, faced with the audience, the Actor submits/ once more submits/ always submits to the need of survival. Yields to the everlasting Game principle. Well? Isn't Factor T embodied in this post-dramatic, actor's dichotomy?

Stretched between the [A]version and the [U]rges Actors, as well as Spectators (with the Spectators wanting high emotions and, instead, being utterly bored after the first five minutes...) we, once again, are confronted with this theatrical comedy as we would be with an ancient tragedy. Hopelessly bound with Factor T, unable not to submit to Factor T, we constantly duplicate Factor T.

The idea of Factor T (the premiere of which will be held in the first days of March after a month's residence in Słodownia +3 of the Old Brewery) appeared in 2006, after the audience's and critic's enthusiastic reaction to the company's performances in New York, and after a week long workshop in Philadelphia which was conducted by the group. The show is an effect of cooperation between Dada von Bzdülöw Theatre and Dance Advance structures (one of the most important organizations supporting dance activities in the USA). The Dada Theatre invited Philadelphia dancer, Bethany Formica, to participate in their dance project. The rehearsals to the premiere took place in two stages - in Philadelphia (in autumn 2007), and in the Old Brewery (in February 2008). The American premiere of the spectacle will be held in September, 2008 during the next edition of Live Art festival. The project's partners are: Polish Cultural Institute in NYC, Kulczyk Foundation in Poznań and Żak Club in Gdańsk. (with support of Trust for mutual understanding, city of Gdańsk and Staromiejske Centrum Kultury in Warsaw). 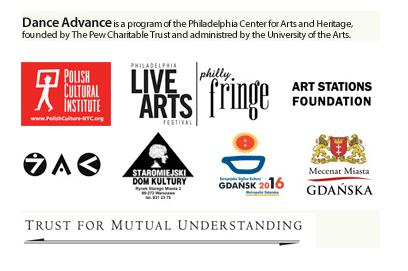