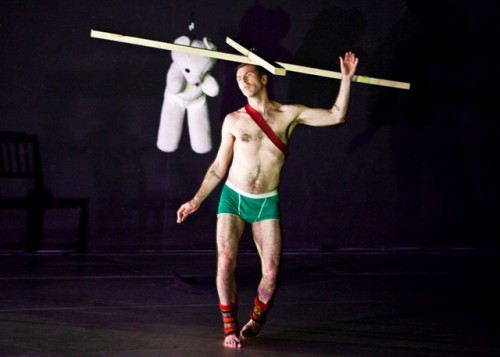 From the references to artist Joseph Beuys, Crotch seems to be about art, its histories and heroes. But Hennessy quickly draws us deeper, past Beuys and into his own inner empire. We witness the sovereign figure of Keith Hennessy in a chaos of elements: songs and dance, a lecture, conversations with the dead. From this a form arises that questions what we know of philosophy, art and ourselves.

“Hennessy’s stage presence burns; he ignites any subject he tackles… it is through a genius like Hennessy that we can confront the state of the human contradiction.”

Crotch was granted NYC Bessie Award as one of the most interesting shows of 2010.