130'
in English and Polish
double bill with pause 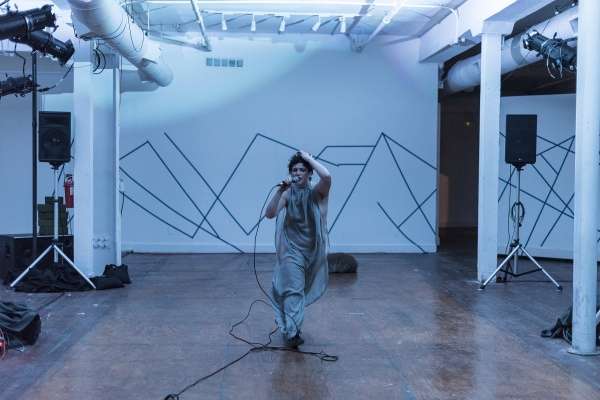 Action is primary is like a ship waiting for a wave. The form of the present is cracked, and any present, past, or future may be called forth; holding what you are doing at the center of what you are doing is paramount. It warbles, wrestles, falls, declares, and re-orients around the present moment, testing the tension between affect/effect, chance/construct, and you/me. Moving through the terrain of the physical, time stands still and potential is crystallized. 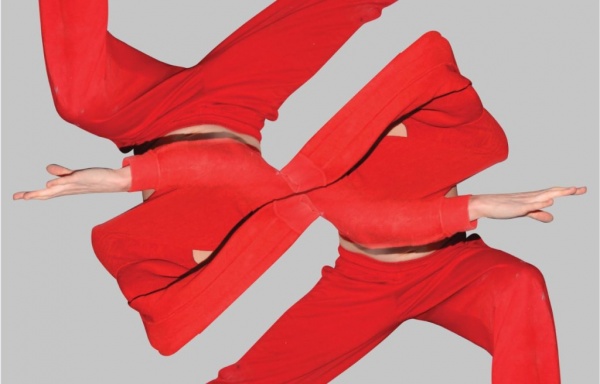 In Maria Stokłosa’s Wychodząc od działania, the viewer is encouraged to join the artist in destabilising the spectator-performer relationship. This performance will never have its premiere because there will never be a final product. Its strength, resulting from the continuous negotiation of its own identity, lies in its ability to transform, in which the only constant is an endless attention shift. The work is an elaboration of the movement improvisation practice Action is Primary by Philadelphian artist Meg Foley. Objects has been created by Alicja Bielawska.

Meg Foley is an educator, performer, and choreographer. Her work is influenced by her identity as a queer artist and parent and is rooted in a loving tumble with formalism in dance and what constitutes performance. She makes dances, events, and objects that explore the materiality of
physical and social identity as choreographic form. From 2012-2016 she danced daily at 3:15pm, culminating in a collective documentation and performance project with three collaborators: Action is Primary. Her work has been presented in performance and visual art venues in Philadelphia, NYC, Los Angeles, Canada, Germany, and Poland. She has received grants from Dancemakers Centre for Creation, Pew Center for Arts & Heritage, Art Stary Browar, Polish Cultural Institute, University of the Arts, the Independence Foundation, and has been supported by a Foundationfor Contemporary Art Emergency Grant. She teaches at University of the Arts and is creative co-director of The Whole Shebang, an arts space in South Philly.  megfoley.org

Maria Stokłosa graduated School for New Dance Development (SNDO) in Amsterdam and the contemporary dance department at London Contemporary Dance School at The Place.  She created "Golden Demons", "Wylinka", "Intercontinental", "MaMa Perform", "Right hemisphere", "Vacuum" a.o. and presented at festivals in Poland, Germany, Austria, the Netherlands, Finland, Russia and the USA . In 2006-2008 she collaborated  with Jeremy Wade. She also danced in Peter Pleyer's Moving the Mirror, Tuning Scores by Lisa Nelson, Project Zero Point by Sara Shelton Mann, Die Zauberflote by Mina Tanaki, and others. In 2008-2011 she co-created Melba music and dance improvisation.