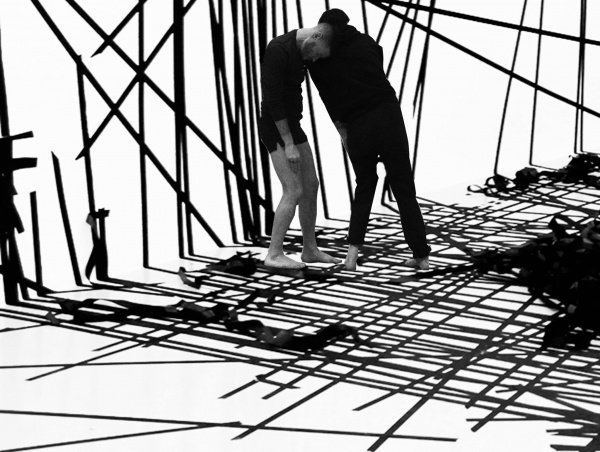 Jeremy Wade is an American dancer/choreographer based in Berlin. He graduated from the School For New Dance Development, Amsterdam in the year 2000. In 2013 Wade served as Guest Professor at the Akademie der Bildenden Kunste, Munich as well as focusing on two creations, a duet based on eros with French Sound Artist Jassem Hindi titled “Messmer” and a new piece titled “Dark Material” with Berlin based Sculptor Monika Grzymala and the California based Experimental Musician Jamie Stewart aka Xiu Xiu. In 2014 Wade will create a new piece made exclusively for the members of an audience at the Hebbel am Ufer, Berlin called “Common Prayer.”

"In an improvised lecture performance I will work to articulate my process of negotiating internal and external impulses plus objects. Sharing my perception of the body and its relations as it unfolds in space-time. Working to render the place where the body ends and the object begins is the foreground one’s attention to the infinite. The surface of the skin perceives temperature and touch as currents of air travel through the room. Thus hypersensitivity and mindfulness (knowing that you know) has the capacity to generate a phenomenological playground. The basis for the body moving through this space is the reciprocation of sensing and feeling. On stage, a performer mediates the realms of preconceived invisible maps in space or a written choreographic plan, in concert with a moment-to-moment unfolding of this score via the senses. Sensing, action, memory and response are all at work in a complex system of feedback as the performer calibrates space, time and impulse.  What occurs with these feedback loops when objects are integrated into the experience? Is it possible to make the solid object multiple and eventually destroy it?" Jeremy Wade