The Parallel Systems exhibition in the Art Stations gallery features three eminent artists. In terms of their creative and intellectual pursuits, the works of Jadwiga Maziarska, Gertrude Goldschmidt (a.k.a. Gego) and Rosemarie Trockel stand apart from mainstream currents in the art world and the tendencies of their contemporaries.

This exhibition represents another, this time more intimate, presentation of works from the Grażyna Kulczyk Collection. The collection’s growth has been based on personal choices and is reflective of individual aesthetic preferences. The passion of the Collector is by not limited by the canons imposed by critics. The Grażyna Kulczyk Collection is the result of a fascination with particular works and the exceptional personalities of particular artists. This is one reason why it includes works by such individualists as Maziarska, Gego or Trockel, who cannot be defined by any particular category in art history. Art critics are not always patient enough to notice artists who do not fit into the mainstream or who subtly break free of it, approaching trends at their own pace, taking a parallel route.

The art of Rosemarie Trockel (b. 1952) is a kaleidoscope of techniques, forms and themes. Her unbridled creativity is visible in her artistic experimentation in virtually each and every existing medium. Trockel studied and worked in Cologne, which in the 1980s was the centre of an extremely active artistic community gathered around the Mülheimer Freiheit group, the heart of the Neue Wilde (Young Wild) in Cologne. The artists of the circle, who opposed the art of the 1960s and 1970s, which was dominated by minimal art and Conceptualism, turned to painting, producing expressionistic and colourful canvases that attested to the rule: “My paintings are about myself”. After collaborating with the group for a short period, Trockel distanced herself from the Neo-Expressionist current and quickly developed her own original and highly ironic artistic stance. A survey of her work is a survey of the major trends in twentieth-century art, from Dadaism and Surrealism through pop-art and minimalism. The artist provocatively plays with all of these currents, jocularly juggling a variety of styles. Trockel’s so-called “knitted paintings” are her most acclaimed works. Displayed at the show will be, among others, one of the early abstractions from 1989, produced according to Trockel’s design by a machine, from GK Collection, and a monumental example of a hand-knitted monochromatic work titled Saw Dust (2010). These paintings, which started to appear in the 1980s and continue to be produced today, are the most frequently analysed works by the artist and, like Trockel’s oeuvre overall, are founded on multiple layers of irony and deliberate references to diverse fields of art.

Gego (Gertrude Goldschmidt, 1912–1994) was born in Germany, where she was received a thorough education as an architect and engineer at the prestigious Stuttgart University. The spirit of Constructivism and the formal discipline of Bauhaus were features that guided Gego’s first artistic projects. After the breakout of World War II, the artist was forced to emigrate from Germany because of her Jewish origins. She settled in Venezuela. At that time, South America was witnessing an explosion of new artistic currents such as op-art and kinetic art. Due to formal similarities, Gego was seen as following in the footsteps of the main representatives of these trends, e.g. Carlos Cruz-Diez, Jesús Rafael Soto, and the Hungarian “father” of op-art, Victor Vasarely. Still, many aspects of Gego’s art make it difficult to place her oeuvre within these clearly defined currents. Using metal cables, the artist built open-work structures in large, empty spaces. The lightness of these structures made them appear to float and expand into infinity in these huge gallery interiors. Most likely, no heir to Constructivism or representative of op-art has utilized an equally original and poetic language, accompanied by such intellectual discipline, during the creative process.

The third artist, Jadwiga Maziarska (1913–2003), was directly associated with the second Krakow Group. Maziarska was active in artistic circles dominated by such personalities as Tadeusz Kantor, Maria Jarema and Erna Rosenstein. Despite her innovative style (she is seen by some scholars as the first Polish representative of matter painting), she was relegated to the margins of art history. As early as the 1940s, Maziarska’s art was characterised by the intensification of texture and a process of spatial expansion in her painted compositions that ultimately resulted in a third dimension. In 1958, this process culminated in the creation of wax reliefs. Attempts to define Maziarska as an “abstract painter” were challenged in 1998, when she created relief paintings based on newspaper clippings and photographs. A unique collection of photographs has fuelled her creative process, spanning her entire oeuvre, from the 1940s until her death.

Parallel Systems is neither a thematic nor a retrospective exhibition, nor is it three individual shows, for that matter. This is an “anecdotal” presentation that whets viewers’ appetite for knowledge and encourages individual exploration, which we merely facilitate. We attempt to tell the history of Maziarska, Gego and Trockel, not solely by offering these artists’ work to the viewer, but also by means of film screenings, lectures and numerous catalogues that have been made available in the Gallery for purposes of the show. 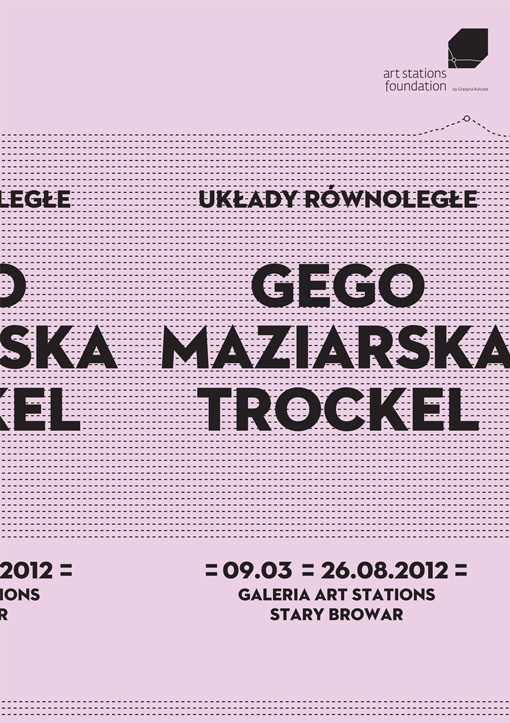