From mid-March to the end of April both floors of Art Stations Gallery hosted an extensive exhibition of nearly twenty artists from the Bunker of Art Collection. The exhibition was an attempt to bring our audience closer to institutional art collecting in Poland.

The Bunker of Art Collection has been put together since the beginning of the 21st century. The works gathered in the collection correspond to the current state of artistic thought and are selected following voices from independent curators and art critics. Within a period of merely several years, until the end of 2007, the collection has acquired as many as 92 works of 27 artists. It includes works of international and Polish artists, with special emphasis put on the Kraków-based ones.

To reflect the overall character of the Collection, Art Stations has chosen a selection as representative and as comprehensive as possible. It was displayed on both grounds of the gallery.

On the lower ground – devoid of natural light, we showed films, projections and lightboxes. In this environment we presented the masters of Polish avant-garde (public projections of Krzysztof Wodiczko and films of Józef Robakowski) as well as younger artists (Marta Deskur, Wael Shawky, Karolina Kowalska, Małgorzata Markiewicz and one of the collection's latest acquisitions – a projection of Bogna Burska).

On the upper ground – lit by natural light, we presented the works of Polish classics of modern painting (Tomasz Ciecierski, Edward Dwurnik, Marek Sobczyk), the co-founders of the famous Ladnie group active between 1995-2001 (Rafał Bujnowski, Marcin Maciejowski, Wilhelm Sasnal, Oskar Dawicki), as well as the works of Łukasz Skąpski and the humorous, ironic objects of Janek Simon. Several works presented in this section emphasized the themes of identity and sexuality at the same time making references to culture, tradition and stereotypes, e.g. the photographs of Katarzyna Górna, Alicja Żebrowska or the latest painting cycle of Lidia Krawczyk and Wojtek Kubiak – representatives the young generation of Kraków-based artists – titled Genderqueer. Speaking of the artist involved in this exhibition it is impossible not to mention the work of Jadwiga Sawicka, represented by numerous paintings, objects and photographies. The whole exhibition is brought to a closure with a set of sophisticated, poetic, rich in reflection and tensions black-and-white photographies of Mikołaj Smoczyński.

The exhibition at Stary Browar Gallery was the fifth presentation of the Bunker's collection, preceded by three successive displays in Kraków (2005, 2006, 2007) and one in Rome (2008). 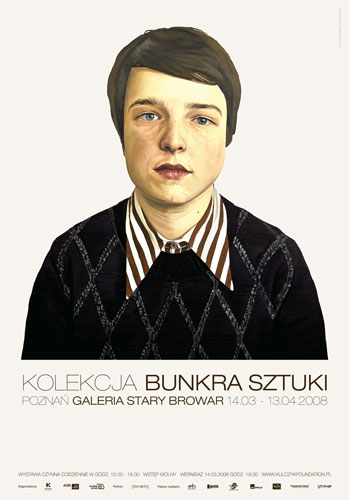