It From Bit EXHIBITION

In May 2009 our Foundation has acquired its new name – Art Stations. This change foreshadows the building of new gallery spaces in Stary Browar's park area, which is planned by the Founder to take place in the future. The exhibition “It from bit”, which was another display of art from Grażyna Kulczyk's private art collection, was organized in order to inaugurate this moment.

For the purpose of exhibition we selected works of two artists: Mexican Gabriel Orozco and German Manfred Mohr, who create their art with the use of computers and mathematical algorithm.

Gabriel Orozco (b. 1962) is considered one of the leading artists of his generation. He freely explores the domains of painting, video, photography, sculpture and installation. He has participated trice in the Venice Biennale and twice in Documenta Kassel. He has had solo exhibitions in the world's best-known museums and galleries: MOCA (Los Angeles), Hirschorn Museum (Washington), Serpentine Galery and White Cube (London). The Samurai Tree, which was presented in the exhibition, is part of Orozco's latest extensive cycle. It reveals the artist's fascination with the game of chess, especially with the Knights move – an unusual algorithm of moves which unlike other chess pieces can produce a circle on the chessboard.

The paintings have been made with the use of traditional methods – gold leaf and egg tempera on red cedar panels – so as to evoke associations of ancient icons. Rigorous theological constrains that used to govern Medieval iconography are represented here by the rigor of the chess algorithm. The circle, as an ideal shape, is a visible reference to both the geometrical and the organic environment. The chess, likewise, combine not only the aesthetics of thinking and speculative action but also stand to symbolize Nature. For Orozco a game of chess is a pure form of synthetic cognition and speculative emulation of nature. And this makes The Samurai Tree one of the most interesting and the most radical propositions of representing the idea of landscape in modern art.

The second artist, Manfred Mohr (b. 1938), is a pioneer of algorithm-based and computer-based art. He is known historically as the first artist to present an entire exhibition of works made with the use of the algorithm as computer code. That event took place in 1971 in Musee d’art Moderne. At present, Mohr's work can be found in the collections of such museums as the Copenhagen Louisiana Museum of Modern Art, Kunstmuseum Bonn, Museum Ludwig in Coln, Stedelijk Museum in Amsterdam or Museum of Art in Łódź.

For almost three decades Mohr had been creating only black-and-white compositions (like the two presented in Poznań: P-350/E from 1984 and P-155/cl from 1974), to introduce color to his works in 1998. In 2002 he designed and built a small PC to run his programs “space.color” and “subsets”. This invention allows the display of colorful images on LCD flat panels in a slow motion, as in the third of of the presented works P-1011/C subset motion (2005).
The exhibition “ART STATIONS PREVIEW - IT FROM BIT” is an occasion to confront a number of questions: Is one who creates algorithms which then generate a work of art still an artist or merely a programmer? Or maybe the 'authorship' belongs to the computer which processes the data and draws the work in its final form? If we treat an artist-algorithmician as a legitimate artist, what then constitutes the creation process? The making of the algorithm? 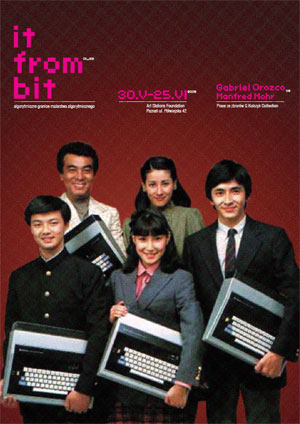