Coproduced by:
Moderna Museet and MDT 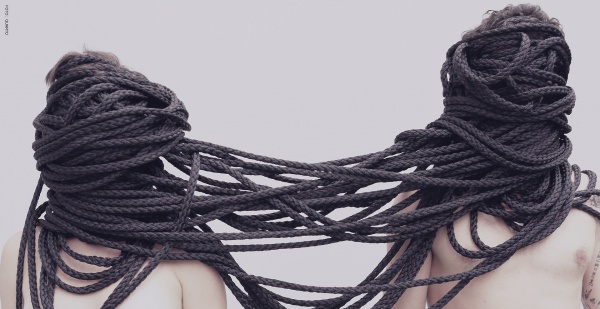 Two bodies captured in 1000 metres of Black rope. The work navigates the transitional space that trespasses the object/subject divide through an ongoing metamorphoses of a massive black thread: a pile of it becomes a lasso, a whip, a snake, and then a huge knot, a multidimensional pattern, an accidental spatial ornament, a labyrinth, a sprawling mass entwining, hiding, revealing, becoming the bodies that it connects and divides. The work is the second part in the ten yearlong research project ROPE series.

QUARTO is an artist duo founded in 2003 by Anna af Sillén de Mesquita and Leandro Zappala. Based in Stockholm they live between Brazil and Sweden collaborating with other artists, researchers, academics and institutions devoted to research and development in the art field. This permanent dialogue in-between two distinct countries forces QUARTO to deal with different working conditions, politics, economies, cultures, infrastructure etc. Placing them in constant challenges and impermanence in a transient and nomadic lifestyle. Their work has been shown internationally at museums, in different venues and galleries throughout the world. 2018 QUARTO received the Birgit Cullberg award.