Residency will take place in Studio Słodownia +3 / Art Stations Foundation between 10th and 23rd of January 2015.

When I have read for the first time texts on animism in e-flux journal I felt that there is a whole new world openning in front of me. In the same time I immedietly came back to my childhood and moments when it was so obvious in my imagination that every object I’m in contact with has its own soul or life and that it relates to me as much as I relate to it.
Nowadays it seems to me that rewieving what we all had as children and don’t have as adults is not only a way to use personal stories from different perspective but also to problematize and fictonalize new visions of our contemporary world. A starting point for the work was animistic thought that what separates us from the world is the body and that the soul is common for all. What is potentially common on physical level? Breath? Air?
What are the specifities of air and how they can feed construction of choreographic practices? What are possible ways to make air visible in performative situation? Through which strategies we can work with air as the material and air as subject?
During residency in Poznań I’m interested in exploring the air as possible choreographic material. I decided to start working with objects which are moving air or being moved and transformed by air. I’m interested in shaping the ways of working with air through such issues as: attention, kinesthetic empathy and an affect. Through exploration of possible relations between objects I’m planning to define choreographic and dance protocols in which the air is the main interest and material to work further with invited performers. While working I treat methods, forms and contents as equal elements of creative process and I will focus on all of them during this research.
The research residency in Poznań will be followed by a residency in Yokohama and an Open Studio at the end of it in the frame of Tokyo Performing Arts Meeting 2015. Open Studio will be a place to share defined strategies and actual questions on the work, with the audience. / Renata Piotrowska 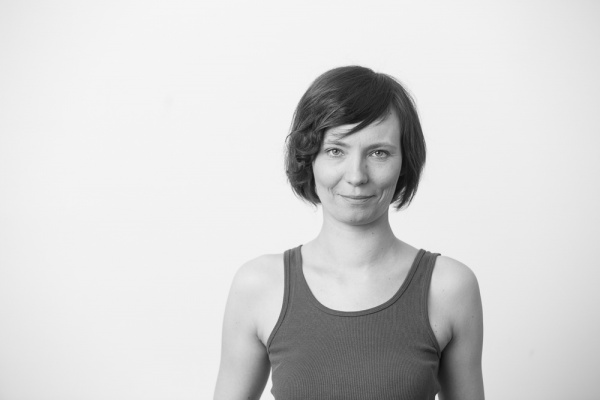 Renata Piotrowska was born in Warsaw, Poland. She is a choreographer, dancer, performer. She works with new dance and performance art. She started her career from practicing contact improvisation and improvisation, which she was treating as tools for her first pieces. She is an author of spectacles from the series UNKNOWN – an interactive dance project which was proposing an alternative forms of spectator’s perception. Nowadays in her works, on the side of the artistic interest in a perception, she contemplates contemporary world through her individual experiences and theoretical texts from the human sciences.  She confrotns choreography with conceptual thinking.
She has created her own performances: “Teraz” / 2007, “Tańcząc z Wrogiem” / 2007, the UNKNOWN series / 2008 – 2010, “break SZTUKA WOJNY” (with Teatr Studio)/ 2010, “UNKNOWNS.SEANS” / 2011, the dance film Inside / 2011, „ON EXPRESSION“ – duet with Eleonore Didier / 2013, „Death. Exercices and variations“ / 2014. In 2008 and 2010, her “Tańcząc z Wrogiem” and “Unknown” were chosen for the prestigious Polska Platforma Tańca review.
She worked among others with Michael Schumacher, Nigel Charnock and Eleonore Didier. She has presented her pieces and took part in many festivals in Poland, Europe, USA and Israel. Renata has won many scholarships of the Adam Mickiewicz's institute, Art Stations Foundation and the Ministry of Culture and National Heritage programme “Młoda Polska” (2010) and programme „Stypendium Ministra“ (2013).
In 2011-2013 she was partecipating in master ex.e.r.ce programme in National Choreographic Center  in Montpellier. Her thesis and practical research were around the notion of attention and empathy as a tools for processes and creations in choreography.
www.renatapiotrowska.pl