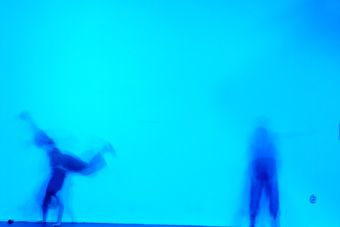 SLAM.IN encompasses contemporary dance, text and music created live and unites them into a theatrical whole. The spectacle's title stems from a, currently trendy, artistic phenomenon which engages elements of poetry, theatre, performance, sometimes also music. It is not widely known in Poland yet. However, it slowly finds its audience. We consider this phenomenon very interesting and our project grows from our fascination with this form of expression. Slam is the domain of word, a ground for poetry in its own right. A kind of poetry which is very much alive and seeks contact with the receivers. This context for slam is of utmost importance in our project and helps to consider the creator-audience relationship. Moreover, slam reflects an extraordinary flexibility of words, hence, the human communication's potential.

The SLAM.IN spectacle is also an attempt to contemplate the space, which appears to be the necessary condition for the existence of all beings, objects and relations. The space is sacred. Another important element of the spectacle is the relation of the word and the body. A peculiar game between the former and the later. In SLAM.IN, the word becomes an aspect of music – its component – further, becoming a component of dance. The impulses go from the word to the movement and back. Gesture initiates speech. The composition of the whole is, precisely, a complex game between the two elements.