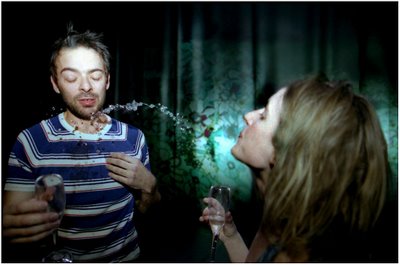 One’s company, two’s a crowd is the second artistic collaboration of Philippe Blanchard and Gemma Higginbotham. Their rich and innovative dance vocabulary explores the individual in society, our human need to bond and the games we play within our social relationships. They delve into the beauty of our insane sanity, the conformist and the rebel inside each of us, the tragi-comical adherence to social education at times absurd, moments of isolation. The moment when we can ‘drop the front’ to show a reality that we normally manage to keep well hidden in the presence of others. A video backdrop is used throughout the performance, from which elements leak into the performance space, creating interaction between reality and fiction through dance, performance, video and sound-scape.

"... personal, charming; it creeps in under your skin"

"a fantastic demonstration of the best in modern dance ... this overwhelming excitement is what you as an audience member will feel when tumbling out after the rumbling applause"

Philippe Blanchard studied dance and music at Conservatoire National de La Rochelle (FR). He left La Rochelle for Cannes to join the Jeune ballet de France and soon after a year became a new dancer for the Netherlands Dans Theater. His career as a dancer led him to different companies, such as Grand Ballet de Genéve (Wladimir Pankov), Batsheva Dance Company (Ohad Naharin) and Cullberg Ballet (Mats Ek & Carolyne Carlsson). It is after being invited to the course for choreographers and composers in Bretton Hall (U.K) and his meeting with Llyod Newson that Philippe delved into choreography and began to establish himself in Sweden as one of the most exiting choreographer. Since 1994 he has been creating his own choreographies and in 1999 founded the group Adekwhat, for which he created Airbag (1998), Noodles (2001), Quiproquó (2003) and Too much night ego (2005). The latter marked the beginning of his collaboration with Gemma Higginbotham as co-creators. This collaboration was carried on in 2006 with their next piece One’s company, two’s a crowd.

Gemma Higginbotham (UK) studied at NSCD (Northern School of Contemporary Dance), Leeds, UK and continued her studies at PARTS (Performing Arts Research and Training Studios) under the direction of Anne Therese De Keersmaker. She has worked with several choreographers such as Michelle Anne De Mey (BE), Akram Khan (UK), Manuela Rastaldi (IT/BE), Rasmus Ölme (SE/BE), Max Cuccaro (IT/BE) and Philippe Blanchard (FR/SE). She has also participated in the movie Deep in the Wood by Theiry De Mey and in the short film untitled by Mari José Burki (SWZ). Since 2004 she has also developed her work as choreographer in co-creation with Philippe Blanchard. This collaboration resulted in the piece Too Much Night Ego. Their second co-creation, One's company, two's a crowd was pre-premiered on the 7th October 2006 at DanceCity Newcastle (UK) and premiered on the 20th October 2006 at NorrlandsOperan Umea (SWE).