WE’RE CELEBRATING the Polish-German anniversary year 2016 organized by the Goethe-Institut and the German Embassy for the 25th anniversary of the Treaty on Good Neighbourship and Friendly Cooperation.
goethe.de/swietujemy

Niemandszeit is a project in the frame of the Polish-German anniversary year 2016 WE’RE CELEBRATING! organized by the Goethe-Institut and the German Embassy in Warsaw for the 25th anniversary of the Treaty on Good Neighbourship and Friendly Cooperation.
goethe.de/swietujemy

Welcome to Niemandszeit! It does not belong to us, not to you, not to anyone!
Come and spend it with us! Theater for us is always a No man's Time: it is not in the control of a director, nor performer nor the audience. But all together have to get involved in it, not with it! 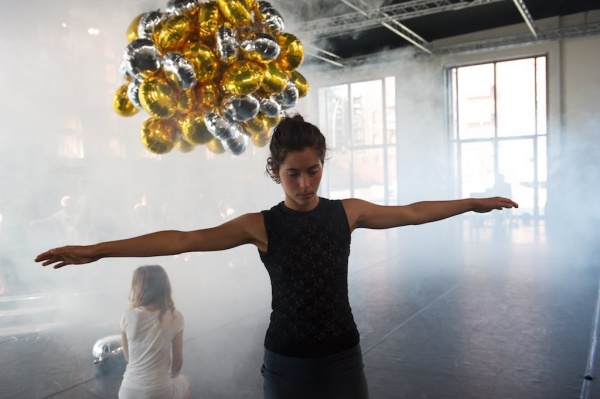 In 1998 Thomas Plischke created the dance-solo "Fleur (Anemone)" as part of his graduation from PARTS. In the same period Kattrin Deufert wrote the text "Myth of Europe", a personal and emotional diary of her commuting in between Brussels and Berlin while finalizing her PhD at Freie Universität Berlin. Both works grasped some of the emotional state of graduating, this no man's time: not a student anymore and not yet a professional.

16 years later deufert&plischke have themselves taught at Universities, teaching and graduating many students. And for Niemanszeit they reversed the roles of teacher, creator and student: they took both works out of the archive to give them to their graduate students. Not to produce any reconstruction, but to become students of their own works again, their former students being their teachers, mentors, coaches and deufert&plischke the performers.
In a process that took several months the graduate students reformulated and expanded the dance solo and the text with their personal experiences and memories of the time in between 1998 and today, a period that was filled with the Iraq war, the historic caesura of September 11, the financial crisis, the Arab Spring, Facebook, Google, NSA ... Images and text from this time were collected and served as an inspiration to contextualize the original material. The original files and materials of the works were destroyed and the graduate students, now colleagues and mentors in work to deufert&plischke produced a new text and movement score to be performed by deufert&plischke together with the audience.

For over ten years, the artistwin deufert&plischke have invited others not only to show their choreography but also to write it. Under the motto »Give us your material and we’ll show you what you’re not doing to it«, they have erased the ego of the artist time and again through collective writing with students at the Inter-University Centre for Dance Berlin (HZT), several international academies and in collaboration with colleagues, they go by. In this way, choreography becomes a social writing practice, an act of weaving – not with the threads of aesthetic preferences but rather with the voices of existential threats such as war and love or philosophical concepts such as truth and freedom.