During their residency artists worked on their newest piece 13 gifts of the spirit (working title). 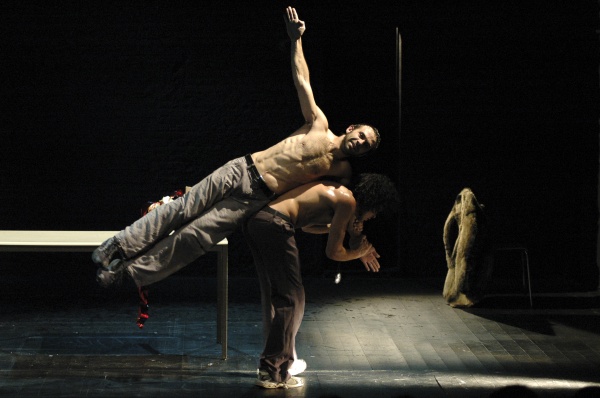 13 gifts of the spirit (working title) is the eighth creation of the flock, a co-production with the Mercat de les Flors [Barcelona] and made ​​part of their creation in different European residences: the first in Art Stations Foundation in Poznan from 6 to 20 January, from 1 to 16 February in the Centro per la Scena Contemporanea de Bassano del Grappa [Italy], from 14 to 28 March in DeVIR-CAPa Centro de Artes Performativas do Algarve in Faro [Portugal] and from 15 to 30 April in Hellerau - European Center for the Arts Dresden [Germany], in the framework of project Modul-Dance.

13 gifts of the spirit (working title) is a declaration of intents in which the flesh places itself at the service of the creative spirit that moves us. In this project we will relate with everything that feeds our “spirit” from the standpoint of what is purely creative – from the standpoint of our established but constantly evolving stage language. We are consequently reacting to the spiritual perplexity which it has been our lot to experience and which our craft prevents us from ignoring. We do not pretend to make a reasoned theoretical reflection on religions or spirituality, but rather to delve deeper into the experience of a fiction and to experience creativity as a spiritual fact for both the person in action and the person who observes. The creation of other possible realities is our craft and our faith. The upholding of the act of creating as a spiritual gift is one of this production’s goals. If faith can move mountains, just imagine what it can do with a theatre. We seek to conceive a pagan performing ritual in an attempt to reconcile ourselves with the decadent view that is held today of “the spiritual”, a concept which, although abducted and monopolised by religions, is inherent to all human beings, regardless of whether they may be atheists or believers.

loscorderos was established in 2003 in Barcelona, although some members have been working together since 1994. In 2006, for their first creation Crónica de José Agarrotado they received the Aplaudiment Sebastià Gasch Award " (…) risk is assessed through new proposals of communication, where all registers are meticulously taken care of, which allows us to feel humanity, dedication and teamwork (…), which leads to a brave pledge of commitment for dance and theatre that shows a clear evolution in the performing arts". In 2011 the members of the Unnim Theater Award 2011 jury acknowledge that "the risk and commitment of a proposal that explores different languages ​​and deals with issues of extreme contemporaneity. By challenging the audience with every sequence and dazzling them with the strength and technique of some performers in grace and dedication, they decide to grant the award for best theatrical production Unnim Theatre Award 2011 to the show El mal menor (The lesser evil) of loscorderos". In November 2011, at the Festival of Temporada Alta in Girona the new herd creation El cielo de los tristes (Heaven of the miserable) , had its premier and was awarded the Prize for the best show in the CENIT III [Contest of new theatrical researchers] in Sevilla. loscorderos is an artistic project whose creations are proposed to inquire into the nature of human beings in their efforts to control their animal instincts, their mechanisms of behaviour and relationships, the variability of their reactions… Its theatrical language is not based on the word, but on the inter-relationship between text and physicality, in order to find new ways of narrative to reach beyond our daily worlds, away from the simple portrait of reality.