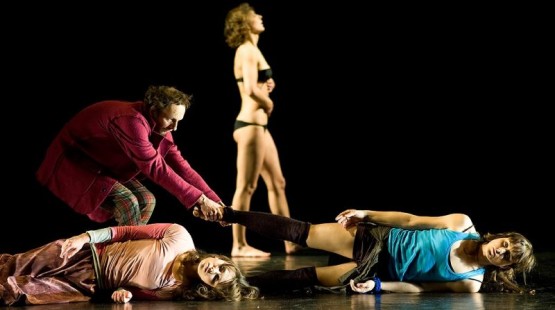 Stravinsky’s “The Rite of Spring” serves as a point of departure for the fortieth production of Dada von Bzdülöw Theatre. However, bypassing this milestone in the history of dance theatre, Le Sacre bases itself on the apocryphal transcript of the purported original version of the ballet, rejected by Diaghilev. The apocrypha was created by Leszek Bzdyl and Mikolaj Trzaska (music). As critics emphasise, it is the company’s most perfected performance, the most serious production, which, at the same time, does not relinquish the pinch of irony so characteristic of the Dada von Bzdülöw’s other productions.

Combining dance theatre with elements typical of drama theatre Le Sacre is a contemporary variation on the theme of sacrifice, understood differently than in the Stravinsky’s piece. Anybody can be become a sacrifice, not just one singled out person. Le Sacre thickens and intensifies the theme, disposing of the Slavic entourage and directing the audience’s attention to the contemporary forms of inflicting death.

Many of today’s generation of Tri-City dancers, who at present determine the quality and strength of Tri-City dance stage, took their first steps with Dada. Dada Theatre has cooperated with many leading Polish representatives of Jazz and improvised music, such as: Mikołaj Trzaska, Olo Walicki, Wojciech Mazolewski, SzaZa (Paweł Szamburski & Patryk Zakrocki).

Since 2009 Dada Theatre has been in close cooperation with Wybrzeże Theatre in Gdańsk, where it can produce and stage performances.

As of today Dada artists have performed in 21 European States, China, India, South Korea and USA.