Created and performed by:
Jeanine Durning 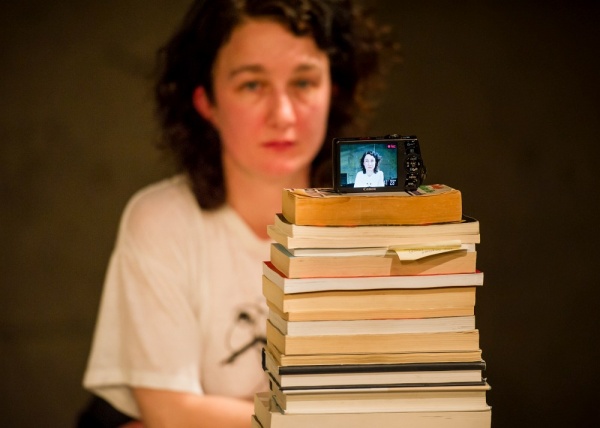 Inging is a choreography of the mind. It’s a rush of uninterrupted and unscripted speech that tracks the velocity of thought and maps the terrain of a shared present moment. Durning applies her physical practice of “nonstopping” to the act of speaking, invoking a force that is at once internal and external, physical and metaphysical. Spoken language stutters, flows, loops, and leaps in a dance dictated by exacting discipline. As thoughts emerge as words, and words emerge from the body, inging brings both speaker and listener to a place of paradoxical intimacy.

Jeanine Durning is a choreographer and performer from New York, creating work that has been described by The New Yorker as having “the potential for philosophical revelation and theatrical disaster.” Her most recent work is based on a practice she calls nonstopping - her solo inging (based on nonstop speaking) and the group work To Being (based on nonstop moving). Durning has performed inging more than 35 times across the US, in Europe and Canada. Her work has been supported by numerous grants and residencies including The Alpert Award for Choreography, The New York Foundation for the Arts, a Movement Research Artist in Residence/NYC, a Dance in Process Residency through Gibney Dance/NYC, and a Viola Farber Residency through Sarah Lawrence College. Jeanine is currently working on a new project supported through residencies, including Movement Research Exchange/ Korea at Seoul Dance Center and the Rauschenberg Residency. She is often commissioned to create original work, and since 2002 has created over twenty works for various companies. As a performer, Jeanine has collaborated with many choreographers with diverse creative concerns including Deborah Hay with whom she’s worked since 2005. Durning has been guest faculty at SNDO/Amsterdam and HZT/Berlin, New School/Lang College and NYU/Tisch. Jeanine is often invited to act as advisor and has worked in this capacity for choreographers in NYC, Philadelphia, Toronto, Berlin, Brussels, and Rennes. In 2017 she was teaching also in Poznan within Alternative Dance Academy program.