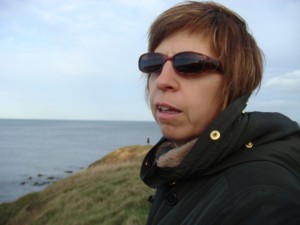 Gunilla Heilborn is a choreographer and film maker based in Stockholm, producing and touring nationally and internationally. After studies at the Tamalpa Institute in San Francisco, USA and the program of choreography at the University of Dance in Stockholm 95-98 she has created performances and movies with great success for both adult and children audiences. Heilborn’s unique way of combining text, motion, video and images, always spiced with humour and a cool irony, has given her an indisputable position as one of Sweden’s most interesting performance and film artists.

Her piece Potato Country premiered at Dansens Hus in Stockholm, Sweden in 2007. This performance is a mixture of dance, performance and text, and is filled with warmth, and humour.

The piece has been invited and performed in venues in Belarus, Finland, Germany and the United States and was presented at Edinburgh Festival Fringe in 2010. The Five Year Plan opened at NorrlandsOperan in Umeå, Sweden November 1st 2009. With ironic and warm observations, the performance explores concepts of value, things we hold dear, things we need to get us through the day, values that can last for five years. Her latest production This is not a love story premiered at Dansens Hus in Stockholm May 6th 2011 to rave reviews and was produced in co-production with NXT-Step, Göteborg Dance and Theater Festival, Dansens Hus in Stockholm and NorrlandsOperan in Umeå.

In the spring of 2009 she collaborated with the Göteborg Ballet for the first time, creating the critically acclaimed production Alaska. 2011 she returns to Göteborg, but this time to The Göteborg City Theater. She will create a new piece for the Big Stage premiering in October 2011.