GAGA is a “movement language” developed by Ohad Naharin, dancer and choreographer, founder of the Israeli Batsheva Dance Company. Its origins date back 20 years ago, to a time when Naharin was recovering from a serious back injury. Since that time it has become part of everyday practice of Batsheva dancers. “I needed two things: to get my body to move a little bit and also to be able to give other people the keys to the way to move without hurting themselves.” Everything has started from Naharin’s self-observation and increased awareness of his own body in movement. From that perspective, he started to articulate his own experiences to the dancers until it eventually became “a language and a method”. Today GAGA is regarded as the “higher education of dance”, one that uses no particular technique – on the contrary, it makes you excel in the method you practice everyday.

Are you interested in classical dance? GAGA can help you to be a better ballerina! Do you want to try contemporary dance? Explore the possibilities of your body and see your gradual progress! You're not dancing but perhaps would like to start? GAGA will help you discover the pleasures of movement!

Ten years ago Ohad Naharin started to teach his “language” to non-dancers too. GAGA reached people beyond the dance world and became a life philosophy for choreographers and ordinary people alike. Now is the time you can try GAGA yourself! Arkadi Zaides, a many-year member of the Bathsheva Dance Company, the first dancer ever who a few years ago, with Ohad Naharin’s permission, unsupervised conducted a GAGA training.

Everyone interested is invited – dancers and those who have never even tried dancing!

Arkadi Zaides was born is Byelorussia in 1979. Immigrated to Israel in 1990. Graduated ‘Misgav’ highschool in 1999, majored in Arts and Dance. In 1999 moved to Tel-Aviv and joined Noa Dar Dance Group. That same year joined the Batsheva Ensemble and in 2001 the Batsheva Dance Company, there danced and created till 2004. He performed in works by Ohad Naharin, Mats Ek, Yasmeen Godder, Sharon Eyal, Poul Norton among other choreographers. Since 2004 Arkadi works as an independent choreographer, dancer and teacher, his were presented in Israel, Switzerland, Poland, Italy, The Czech Republic, China and Japan. He created works for the Batsheva ensemble, was invited to create a multi genre performance in Japan and has been selected as one of three finalists in dance for the third cycle (2006-2007) of the Rolex Mentor and Protégé Arts Initiative. Since 2002 Zaides has been teaching ‘Gaga’ – Ohad Naharin’s movement language. He is teaching dancers and non-dancers in Israel and around the globe. 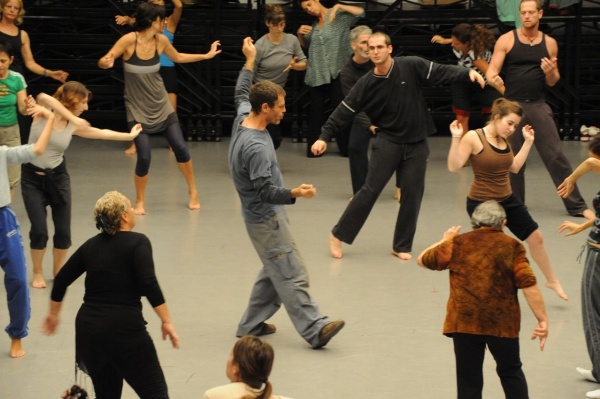