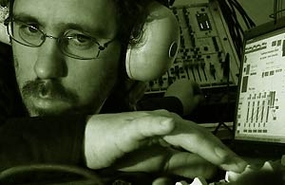 Eran Sachs works as composer, improviser, sound-artist and curator in Jerusalem. Originally coming from a classical background, he turned his attention towards Metal and Modern music, and started performing at the age of 14. As an improviser Sachs has collaborated with Oren Ambarchi, Thomas Koener, Marc Behrens, Achim Wollscheid, @c, Eric Boros and many others, mainly playing his self-developed system, the No-Input-Mixer, which he has been playing since 1998. He plays this machine regularily in the Doom-Dub-Noise outfit Lietterschpich and John Zorn's "Cobra" improvising ensemble in Israel. He has presented his works and compositions in such festivals as Sonorities (Belfast), Transmediale/CTM (Berlin) and Theaterformen (Hannover), as well as spaces and platforms such as Sonic Square (Brusseles), Podewil, Haus der Kulturen der Welt (Berlin), Melkweg (Amsterdam), Israeli Cinemateques, Kulturbunker (Cologne), Muffathalle (Munich), Sonic Process, Heara and many others. His work "Studio" with sculptor Eytan Ronel was awarded the Excellence Award by the NY International Fringe Festival. He also has collaborated extensively with sound artist Sebastian Meissner (Klimek, Random INC.), with whom he has recently released “Into The Void” (on Sub Rosa), a reflection on the old abandonded Jewish quarter Kazimierz in the city of Krakow. His works have been released on Mille Plateaux and Sub-Rosa, as well as various labels in Israel. As a sound-artist his works tend fuse the sonic with the political, as in the case of "Yannun Yannun", which portrays the harrasment of Palestinian villagers by fanatic right-wing settlers. He founded and managed the Yad-Vashem bookstore - the only holocaust dedicated bookstore in Israel.

Nitsan (Shorf) Domidiano Video artist, Director, Script writer (b. 1975). After spending the mid-90ies in post-revolutionary Prague, Nitsan Domidiano returned to Jerusalem and graduated from the Sam Spiegel Film and Television School in Jerusalem in 2004. Over the last few years she has devoted her work to the fusion of the artistic and the socially minded. This desire manifests itself in many projects, often focusing on the contradictious and fragile nature of narratives, which stems from gaps between different perceptions of reality .

Examples of such endeavors include: Co-writing the script for the feature film “Dancing Arabs”, together with original author Sayed Kashua. Their script was recently awarded the Israeli Film Fund Grand for Production – Israel’s largest grant for film production (2006). In 2005 she co-founded a documentary production team for the AIC (Alternative Information Center, a Palestinian-Israeli organization). In this capacity and others she was directing, shooting and editing short films in East Jerusalem and the West Bank. In 2006 she was the director of "Daila" (a cultural center founded by the Israeli Committee Against House Demolitions, promoting alternative and minority discourses in Israel/Palestine). Her work administering “Daila” included curating and producing artistic, social and political events, as well as sound-art events and performances, in a consistent attempt to give room to what she considers to be alternative narratives.
Her work was presented in various platforms, among them the Experimental Cinema program in the International Film Festival in Jerusalem (2003) as well as “Czechpoint”, the International Exhibition and Festival for Political Art in Prague (2006).

Nitsan Domidiano has recently completed a residency program by Tirana Institute for Contemporary Arts (TICA) in Albania, in which she focused on the emergence of such contradiction of narratives in transitional societies. She has collaborated with sound-artist Eran Sachs on a number of sound-installations, both interactive and non-interactive, and their work will be featured in the 2007 “ctrl-alt-del” sound-art program in Istanbul.