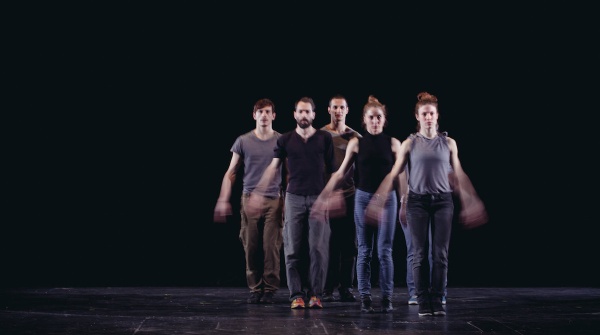 “Elvedon” is a project choreographed by Christos Papadopoulos, inspired
by Virginia Woolf’s novel “The Waves”. The novel follows the lives of six
friends from childhood through maturity until old age. Six distinct
personalities, six different perceptions of reality, intertwined in an everflowing world, like the “waves” of the ocean. The main element in Woolf’s
novel, which also becomes the core of this project, is the passing of time: a
powerful force of evolution, resulting in a world of constant change, where
opposite forces like life and death, love and friendship, personal and
common collide and cooperate at the same time, creating a wrinkled
harmony.
The concept of eternal flow is the heart of “Elvedon”, portrayed with the
means of repetition, bouncing, and gradual development of the corporal
movement.

Christos Papadopoulos graduated from the School for New Dance Development (SNDO) of the Amsterdam School of the Arts, The Netherlands in 2003 and from the Dramatic School of the National Theatre of Greece in 1999. Christos is a founding member of the dance company Leon and the Wolf. His personal projects include: OPUS (work in progress) / Porta Theatre 2016, Elvedon / Porta Theatre, ARC For Dance Festival, Athens 2015, Counter Reset / Melkweg Amsterdam 2003. In collaboration with choreographer Vaso Giannakopoulou, he conceived and developed the performance Digono / Panorama Dance Festival, Athens, Alexandria Egypt 2005, Istanbul Turkey and Arnhem Holland 2006. As a performer Christos has participated in dance projects by Dimitris Papaioannou, Alexandra Waierstall - Noema Dance Company, Kirstin Kuyl Anderson - WEGO dance company, Robert Stain, Fotis Nikolaou company X-it, Natassa Zouka, Marousso Karaleka, Saskia van de heur, Martin van de Drift, Mariella Nestora and Ria Higler. He has also worked extensively as a choreographer and movement director for theatrical productions. Christos was a member of the choreography team responsible for the opening ceremony of the European Games in Baku 2015 and opening and closing ceremonies of the Olympic Games in Athens 2004. Since 2013 he collaborates with Odeion Athinon Theatre Academy as an instructor of choreography, composition and improvisation. He has also taught workshops on technique, composition and improvisation in Athens, Chania, Thessaloniki, Copenhagen.