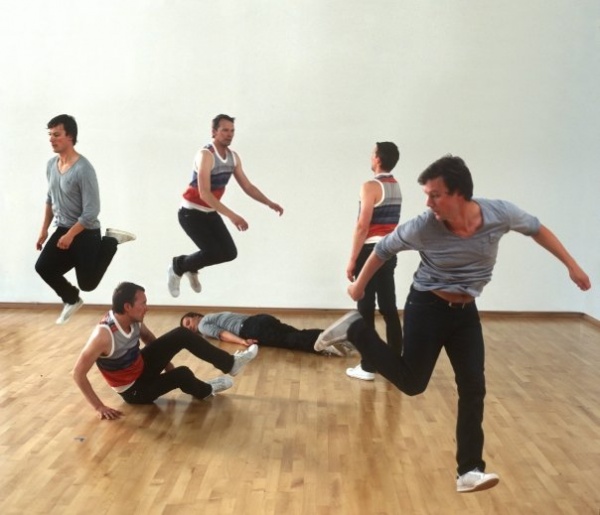 After the enthusiastically welcomed (in 2006) The Electric Tales, Tom Roden and Pete Shenton return to Poznań with their Dance, Jokes & Dance Jokes spectacle - a constantly changing, layered with colored stories and jokes from Tom's and Pete's domestic life, minimalist dance comedy for two. The mundane (a bird in the garden; a journey to a wedding-reception; domestic decorations; spouses' phone-calls or dad's old car) gives material for the private world of conversations between partners. A theatrical and dance spectacle - sometimes funny, sometimes hypnotic - interrupted at a point when you least expect it.

A spectacle for two, which marries comedy with a choreographic minimalism and a pinch of philosophy.

New Art Club is Tom Roden and Pete Shenton. They have begun their cooperation in 1995. In 2001, they have founded a company and have produced a number of characteristically intelligent and funny dance spectacles since then. They have staged their performances in Great Britain, as well as internationally. They have also been granted many awards. The Short Still Show spectacle made it to the finals of The Place Prize for choreography (2004). The break-through spectacle for New Art Club, was This Is Modern - a hilarious parody on contemporary dance, which was a hit and has been touring since its premiere in 2003. Their next production, The Electric Tales, has also been internationally staged since its premiere. The premieres of Christmas Show and The Notcracker were held in 2006 and, similarly to their previous productions, have been staged ever since. Up till now, New Art Club has created: This Is Modern (2001), The Electric Tales (2003), Long Range Effort (2004), The Short Still Show (2004), Dance, Jokes and Dance Jokes (2005), The Notcracker (2005) and The Visible Man (2007).