The quiet dance / The speaking dance 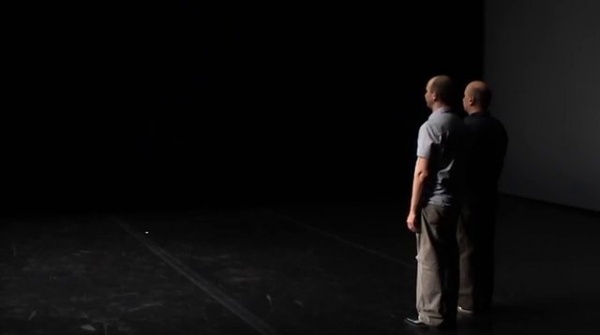 Jonathan Burrows (choreographer) and Matteo Fargion (composer) are among the most active and internationally recognized British artists. They owe the reputation to their intelligence, sense of humor and great musicality of their performances
Before they started to perform together, they had collaborated for many years as choreographer and composer. The trilogy stems from their mutual interest in exploring the relation between music and dance - the need to look closer and redefine these relations. The shows traveled successfully worldwide. The first part of the trilogy, Both Sitting Duet, won The New York Dance and Performance "Bessie" Award in 2004. The latest production - Speaking Dance had its premiere in Autumn 2006, so the audience in Poznan will have the opportunity to see it still during its opening season.

Both Sitting Duet (2002) The show is the result of direct transcribing a musical score into movement. It is an attempt to redefine the relation between music and dance, to find their counterpoints. Sitting in silence, with scores at their feet, the artists have a wonderfully intricate, precisely timed conversation using fingers, hands and arms. The movements, both ordinary and extraordinary, create a subtle game of giving and receiving.

The Quiet Dance (2004) The performance is a formal but humorous meditation on the nature of communication, and the relationship between each other and with the audience.Their radically minimal dance gives space to the materialization of emotional and mental associations.

Droll and original, it's an ideal dance snack.

The Speaking Dance (2006) It is a funny, clever, ingenious miniature based on the artists' individual disciplines, in which they continue their gentle exploration into how the relationship between music and dance is perceived, and the fragile but permeable boundaries between the two worlds. Two men, two chairs, two microphones; there is some dancing, talking and singing...

How refreshing to encounter modern dance promising something other than bodies in high velocity, bullet-like action...

If only all dance shows were so funny and intelligent!

Jonathan Burrows (born in 1960). He started his career as a soloist with the Royal Ballet in London, but formed the Jonathan Burrows Group in 1988 to present his own work. The company travelled widely and gained an international reputation with pieces such as 'Stoics' (1991), 'Very' (1992), 'Our' (1994), 'The Stop Quartet' (1996) and 'Things I Don't Know' (1997). In 2001 he presented 'Weak Dance Strong Questions', a collaboration with the Dutch theatre director Jan Ritsema, followed in 2002 by 'Both Sitting Duet' with the composer Matteo Fargion (1st part of trilogy closed in fall 2006 and to be seen as a whole at this years festival). Other high profile collaborators include Sylvie in 1996, and his invitation in 1997 to choreograph for Forsythe's Ballet Frankfurt. In 2002 Jonathan was given an award by the Foundation for Contemporary Performance Arts In New York in recognition for his ongoing contributions to contemporary dance. 'Both Sitting Duet' was the winner of a 2004 New York "Bessie" Award.

Matteo Fargion ( born in 1961). He studied composition with Kevin Volans in South Africa, and later with Howard Skempton in London. He met Jonathan Burrows in 1988, and has since written music for many of his pieces, including 'Dull Morning', 'Stoics', 'Hands', 'The Stop Quartet' (with Kevin Volans) and 'Things I Don't Know', in which he also performed 'Donna Che Beve' for 3 amplified cardboard boxes. Matteo has also written music for theatre including an oratorio ('Das Kontingent') commissioned by and performed at the Schaubühne Berlin and TAT Frankfurt, a chamber opera ('Le Bellezze d'Hortensia') at the Theaterhaus in Stuttgart. In 2004 he wrote music for Thomas Ostermeier's prize winning production of Jon Fosse's 'The Girl on the Sofa' shown at the Edinburgh Festival, and in 2005 he collaborated and performed in Canadian choreographer Lynda Gaudreau's 'Document 4'. His piece 'Duets', written in collaboration with Kevin Volans, is released on Black Box Records. Matteo also runs composition workshops at PARTS, in Brussels.