with the support of
The Ministry of Foreign Affairs- The Division for scientific and Cultural Affairs, Israel
Theater Freiburg (DE), HaZira Performance Art Arena (IL) 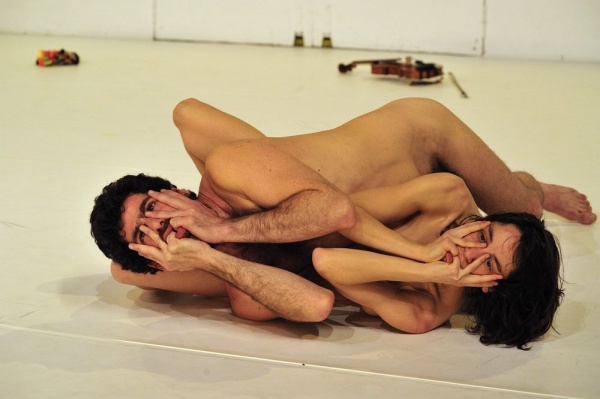 On a bare stage, two performers, two undressed all-eaters, are totally exposed. However, the work is deliberately keeping to a delicate balance between the visible and the hidden, the unequivocal and the ambivalent, the textual and the emotional. Furthermore, it stands mainly between a minimalistic visuality in comparison to the performative richness of the duo.

It is a primal dance that uses the tonal harmony of the body as raw material for a stream of unconventional scenes and segments, which are surprising and often funny. This creates a grid that inquires about the cultural within the body and the visceral within culture.
An Hour with All-Eaters can simulate an one-hour visit to an archaeological site. This archaeological site is physical, human and performative as well as real space. During the visit, the viewer can admire the smallest findings, while at the same time he finds himself in the middle of large ruins. Now he has to complete his own vision of this historical picture; what this place he now occupies used to be.

Critics Say
“The piece defines, almost critically, the relations between nature and culture, civilization and primitiveness, body and word; it emphasizes the pains of the human body and all that is plastic and picturesque in it.” Shir Hacham, Haaretz

“This surprising duet, in which the body forms an early human archeological site, seems to open a page in a book of anthropology, for us to examine its contents in a contemporary perspective…intriguing and surprising to the eye…” Ruth Eshel, Haaretz
“Nudity in this piece is straightforward, and is not for a moment decorative or extravagant. It presents an animal existence so naturally that some parts feels like a nature documentary, while other moments are gentle and naïve, cultured and almost picturesque.” Anat Zecharia, Yedioth
“It seems as if both performers are eating themselves up – until they drop everything; the set design, the costumes and the music…Proximity and intimacy are intermittent with humor and playful ideas” Annette Hoffmann, Badischen Zeitung

"The sensitivity and accuracy that went into structuring the movement and sound sequences serve to reduce some of the embarrassment...clearing space for a curious, in-depth look into the moving human body… a rare opportunity for self observation and contemplation of humankind." Dana Shalev, Erev-Rav 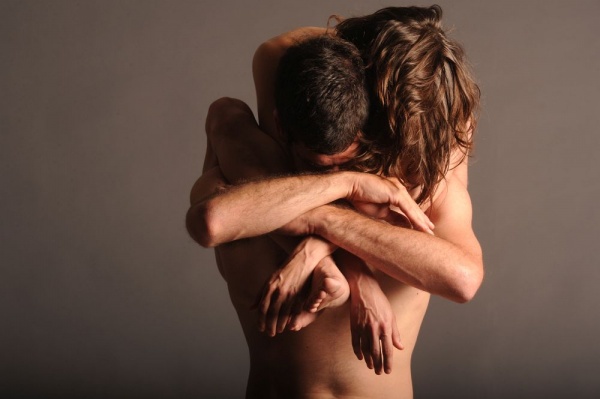 Shani Granot, born in Israel in 1978, joined the Batsheva Youth Ensemble in 1996. Between 1998 and 2002 she studied at P.A.R.T.S. Since 2003 she has worked in close collaboration with Cristian Duarte, Peter Fol, Keren Levi, Arkadi Zaides a.o. and created several pieces. In 2012 Shani created All-Eaters together with Nevo Romano, as part of Machol Hadash project by HaZira, Jerusalem. On November 2012 they were invited to Theater Freiburg (Germany) to continue developing the materials they worked on, and created "An Hour with All-Eaters" full evening show.

Nevo Romano, born in Kibbutz Mevo Chama in 1982, is a violinist, dancer and performance artist. Nevo studied violin in the Buchmann–Mehta School of Music, and graduated from the School of Visual Theater and the Adama Dance School, where he later taught technique and improvisation. Between 2008 and 2010, Nevo was dancing in Liat Dror and Nir Ben Gal Dance Company. In 2011 Nevo created together with Nava Frenkel the solo “Walking Away” which he performs. In 2012 he created All-Eaters together with Shani Granot, as part of Machol Hadash project by HaZira. On November 2012 they were invited to Theater Freiburg (Germany) to continue developing the materials they worked on, and created "An Hour with All-Eaters" full evening show.