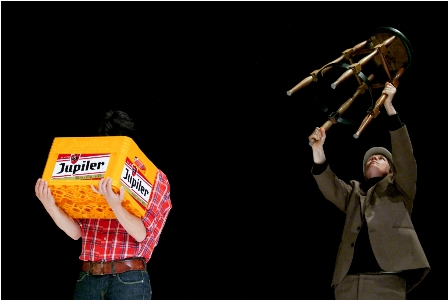 Already Made is of course a direct reference to the ready-made objects Marcel Duchamp defined as “an everyday object promoted to objet d’art by the artist’s choice.” Objects which in theory are harmless and of no value, Gaëtan Bulourde uses them in his own way, amusing himself by hijacking them and making them into performance vehicles. In this creation, the object of the performance is the performance itself. The “already performance” thus becomes the vocabulary for a project mocking itself.

Gaëtan Bulourde was born in France, but works and lives in Brussels. He studied math to become a guitarist of a rock band. Since 1998 he creates projects on the crossroads of dance, theatre and performance art (solo Pfuuf ou le bout de la langue, TV News Hasselt, Not every object used to nail is a hammer). As a dancer Gaëtan worked with Meg Stuart, Xavier Le Roy, Marco Berrettini, Martine Pisani, Thomas Lehmen and Christian Rizzo.