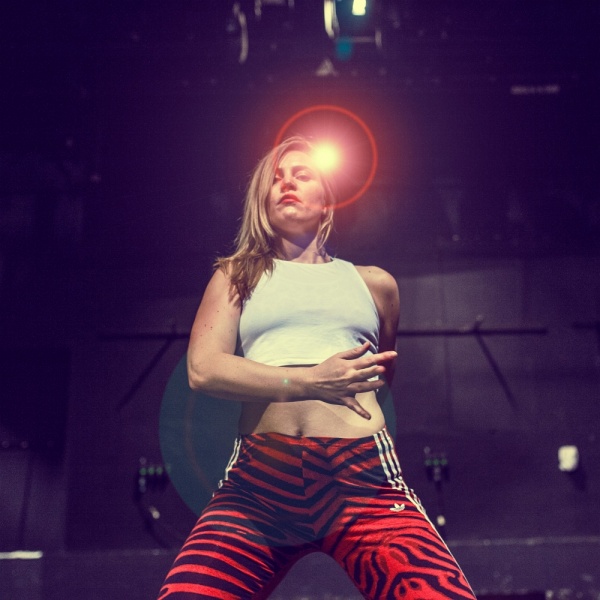 Marta Ziółek's performance titled “5 things or several statements about choreography” is a performative lecture that draws on a subjective approach to the history of dance and the modern problems of choreography.

The five “things” from the title are: Marta Ziółek, her voice, her dance, the lecture and an XXL Deluxe object, which is a combination of the other elements. Starting with the famous 1841 ballet "Giselle” and continuing through Niżyński's sexual ballet revolution and Isadora Duncan's free dance, Judson Church minimalism, the 1980s neo-figurativeness (Anne Teresa De Keersmaeker), the theoretical turn of the 1990s (Jérôme Bel) and the move towards the body of the 2000s (Mette Ingvardsen), Ziółek shows how the understanding of dance and choreography changed in the 20th and the beginning of the 21st century. Her lecture includes a provocative and very affective dance commentary, which creates tension between the language layer of the performance and its corporeal execution. While stipulating the movement of dance away from the theater and towards visual arts, and underlining the importance of figures such as Vanessa Beecroft, Marta Ziółek proposes her own vision a politically engaged choreography based on pictoriality, passion and strength. By relating to the manifestos that changed the history of dance, she creates her own (anti)manifesto.

The solo was created during a residency in conjunction with the “Let's dance” exhibition at the Art Stations gallery in Stary Browar in Poznań.

The residency was possible thanks to support from the Institute of Music and Dance.

Marta Ziółek is a choreographer and performer. Before she began her study of choreography at the School for New Dance Development (SNDO) in Amsterdam, she was a student of an inter-faculty humanities programme at the University of Warsaw. She has taken part in workshops, projects and collaborations with such choreographers and theoreticians as Bojana Cvejic, DD Dorvillier, Deborah Hay, Maria La Ribot, Trajal Harrell, Benoit Lachambre, Ann Liv Young, Xavier Le Roy, or Meg Stuart. In 2011 she received the prestigious Dance Web scholarship at ImpulsTanz Festival in Vienna, in 2012 she took part in Europe in Motion, a platform for young, emerging choreographers, while in 2013 she received a scholarship from the Amsterdam Fund for the Arts. In her art, Marta Ziółek focuses on expanding the scope of choreographic practice. Adopting an interdisciplinary approach, she examines boundaries between visual arts, performance, and choreography. As a choreographer, she tests limitations in performance, investigating everything that condition freedom of action in choreography. She is interested in exposing, unmasking, and challenging the things that are forced upon, required of, and dictated to a choreographer as an inseparable element of his or her practice. She considers dance to be, first and foremost, about the way bodies act and affect one another and the environment around, as well as the manner how they are disciplined and exposed when in motion. She is interested in creating situations, kinetic events, dancing in an expanded field of image and sculpture. She approaches performance as a concrete way to reconfigure history and corporeity, to work with embodiment, its reproduction, and disembodiment (alienation). She considers choreography to be an experimental practice which triggers different forms of thinking in movement and thus must continuously redefine its limits.