Thanks to the support of City of Vienna i Federal Chancellery.KUNST. 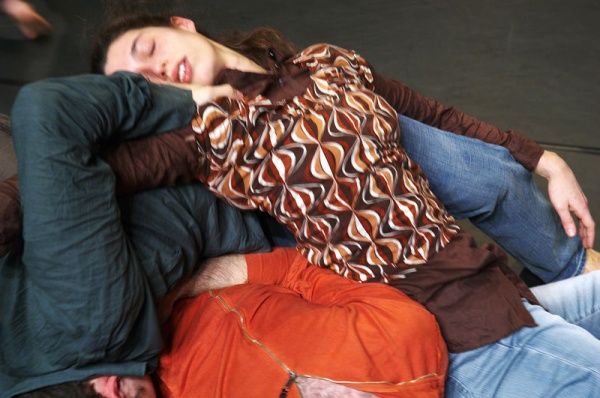 After the last year's, extremely well received by the audience spectacle titled Three Seconds & No Credits, a Vienna-based choreographer – Willi Dorner – comes back with his latest 404 spectacle. 404 continues the exploration of the problem of paradoxical inability to communicate successfully in the era of Internet. The title stems from internet slang, in which 4'0'4 means ''not found'' (http:errormessage) – not having a signal, not being able to get through.For Dorner, 404 becomes the symbol of the Internet generation's inability to establish social contacts, or to care for relationships. All of this in a breath-taking, based on a strong physical contact movement form, which additionally, is spiced up by a Dorner-like distance and performed by seven dancers and a guitarist.

"Dorner takes an insight into the crippled inter-personal relations (...) He confronts and combines three males and four females on the stage. However, whenever a group of bodies is formed, a catastrophe occurs. The closeness disintegration and the disappearance of sympathy resembles a blow of a computer processor, despair and death constitute a permanent threat. The coat covering self-satisfaction for show is very thin. Chill and brutality are present underneath it. People are used, pushed, almost crushed. Even a simple embrace could become a threat. Love? Error!"

"(...) Heinz Ditsch's composition is an ideal fusion of electric guitar sounds and film motifs (for instances Wagner's ''Valkiria'' present in ''Apocalypse Now''). The music represents the same kind of violence and aggression as the one present in Dorner's choreography. The choreography, to go further, is a constant struggle, fight, wrestling, jerking. Dorner lets the bodies crash, push through and fall down(...) He managed to generate a ruthless dance event, which appears to be a saturated with dangerous energy fighting arena."

Willi Dorner is currently one of the most renowned and recognizable choreographers of the independent, Austrian dance scene. After he graduated from Vienna Conservatory, Dorner continued his dance education to receive an Alexander's technique teacher certificate in 1999. He also studied body mind centering and contact improvisation with Andrew Harwood and Nancy Stark Smith, as well as realizing techniques under Stephen Petronio's wings. Combining all these experiences is a characteristic feature of his dance.

As a dancer, Willi Dorner collaborated with Nina Martin (New York) and Mark Tompkins (Paris). He has been creating his own choreographies since the beginning of 1999. His spectacles are very popular all over the world (Cie. Willi Dorner has performed in Europe, the USA and South America) and put in a raw with other most interesting phenomena of the contemporary, vanguard dance scene.

Willi Dorner has been granted numerous choreographical awards, his company has been appreciated by the Austrian Ministry of Culture on a multitude of occasions and the Mazy spectacle was announced the best Austrian dance production of 2000.