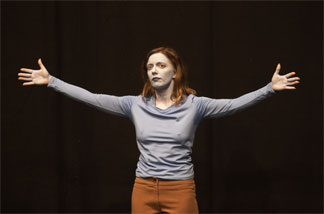 Collective Jumps is a workshop which proposes the building of a community in dance work. The cultural forms and practices of folk dancing are (critically) scrutinised and explored in the context of contemporary work policy and the dancing body. The project refers to the body as “a place of resistance” and perceives it as a performative source of interactivity, a collective body which also becomes a stage. The analogies with the contemporary Occupy movement or the Turkish/Kurdish Halay dances performed during demonstrations in a big circle as a form of protest are obvious: a political body in movement – in dance.

In practice, the workshop is an introduction to Isabelle Schad’s research on the relationships between form and content, which she has been conducting for many years to determine where form comes from – to find its roots and beginnings. The practice draws upon the experience of the body in Body-Mind-Centering® and on embryology (in the latter case, this relates to the basic biological concepts regarding how a form comes to be). As she combines these concepts with the different dance forms of using space, like chains or circles, and with step arrangements, Schad asks, for instance, what kind of energy do alternating steps release, how does this energy fluently pass from one dance form to another, how and when do people touch each other in folk dancing or what do partner changes signify in group dancing and dancing in pairs and what this means in community building.

The body practice during the workshop will relate to the early stage of embryonic development (before cell division) and will be opposed in dance to the equivalency of people within a group. The effect will be a model of society opposed to the modern need or rivalry: subjectivity (individuality) within a collective and within a community.

Isabelle Schad is a Berlin-based choreographer, whose internationally presented shows are the result of in-depth bodily explorations (mainly based on Body-Mind Centering) and research on the processes of bodily re-presentations. In 2005, she co-founded, with Alice Chauchat, Frédérik Gies, Frédérik de Carlo and Odile Seitz, the Practicable collective in Berlin, which introduced new forms of artistic collaboration. This horizontal structure was based on the desire to share a widely perceived dance practice and became the foundation for performances signed by more than one artist. A turning point in Isabelle’s work was meeting visual artist and photographer Laurent Goldring. Since 2009, they have been creating the series Unturtled(s) (one of the performances was presented in Stary Browar in 2010). As an educator and choreographer, Isabelle works with HZT Berlin and conducts workshops all over the world (she has already been a teacher during ADA, in March 2010).