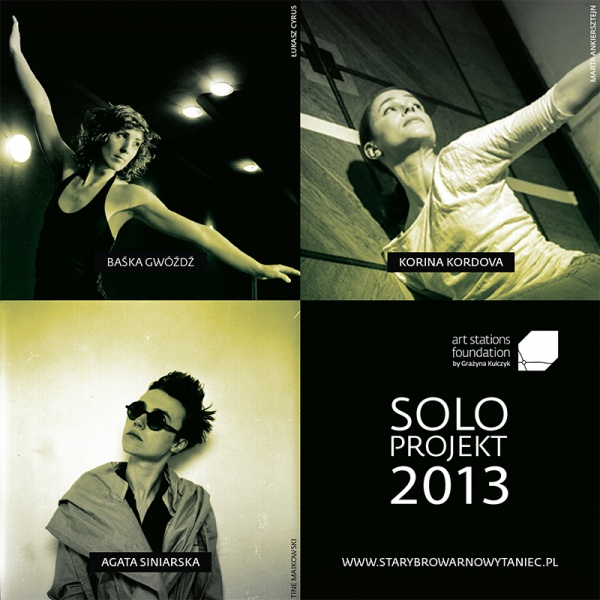 SOLO PROJEKT is the first in Poland residency program created by Art Stations Foundation in 2006. Its mission is to support Polish dance artists in their search for their individual artistic language. The program is directed at professional dancers and beginner choreographers whose interests reach beyond the traditionally understood dance theater. The project's main stress is put on the very process of creation and the artistic experiment, with the hope that this will lead to an attempt of reflecting over the art of dance and, perhaps, to redefine the very concept of contemporary dance in the search for the means of physical expression. The program's motto are the words of an English choreographer, Jonathan Burrows: "One needs two legs, two hands and, most of all, a head to create a dance."  With this idea in mind, we have decided to emphasize not so much the idea of “spectacle as a product” but rather focus on the creative process physical research.

Till now Solo Projekt artistic mentors were: light director Bruno Pocheron, choreographers: Hooman Sharifi, Peter Pleyer, Luca Giacomo Schulte and Ornella Balestra as well as Ria Higler.In 2013 the artistic mentor of the residents will be Bush Hartshorn, the artistic director of Dansehallerne in Copenhagen, dance curator, dramaturge and performer. Together with Old Brewery New Dance program curator Joanna Leśnierowska, he will select three young artists/residents and will support them throughout the process of creation.

Artistic mentor
Bush Hartshorn / UK
After a long and distinguished career as a truck driver Bush graduated from Dartington College of Arts in 1982 with a degree in Theatre Language. From that time onwards Bush has pursued a career as a community artist, dramaturge, performer , theatre programmer and artistic director in UK, Spain, Belgium, Netherlands, Ireland and now Denmark where he is the Artistic Director of Dansehallerne Copenhagen. In 2009 he qualified as a coach in Relational Dynamics which has informed his work in mentoring dance artists. This has all been underpinned by a lifelong commitment to Liverpool Football Club.

I have been interested in the development of young artists since I was one myself, which now spans over 30 years. In 2009 I qualified as a Relational Dynamics coach. I found many of the techniques and principals of coaching to be extremely relevant in the process of mentoring young choreographers through attempts to make THEIR best work. I have thoroughly enjoyed my time with these three young women and found their enthusiasm and commitment quite contagious. I hope that you to enjoy and appreciate their hard work that comes to its final fruition.
Bush Hartshorn, Artistic Director Dansehallerne Copenhagen Denmark

Baśka Gwóźdź, freelance dancer and choreographer. She graduated from College of Voice and Dance in Musical Theatre in Gliwice and Art Management in University of Lower Silesia. She studied also at the Drama State Academy of L. Solski in Krakow – Faculty of Dance Theatre in Bytom. Is a co-organizer of Movemet's Active Culture Festival – Circulation in Wrocław and was an Assistant Producer of Deltebre Dansa Festival in Spain. She received Alternative Dance Academy 2013 scholarship from Art Stations Foundation (Old Brewery New Dance program) in Poznań. She is also a free listener of the Open University of J. Grotowski in Wrocław. She was also an apprentice in Teatr ZAR at the Grotowski Institute. Worked for few seasons in the Musical Theatre Capitol in Wrocław, currently collaborate with Art Color Ballet in Cracow.
baskagwozdz.blogspot.com

Korina Kordova, dancer/choreographer Korina Kordova worked in her native Brazil and in Holland before joining the Silesian Dance Theatre (PL). A member of SDT during 7 years, she worked with a number of Polish and international choreographers, performing in Europe, North America and Asia. Worked with Jacek Łumiński (PL), Anna Piotrowska (PL), Barbara Bourget (CAN), Mihai Mihalcea (RO), Idan Cohen (ISR), Kuik Swee Boon (SGP), Suzana Gomes (NL/BR) Irad Mazliah (ISR) and Helena Ganjalyan (PL). Has also cooperated with Kokoro Dance (CAN), BalletMet (USA), Samovarteateret (NO) and Teatr Tańca Zawirowania (PL). She is the author of the solo pieces “Mobile Variations”, “Night”, “Karolina” and “Borderline”. She was a scholarship holder in the Alternative Dance Academy 2012 at the Stary Browar Nowy Taniec / Art Stations Foundation by Grażyna Kulczyk. In the same year, she started her own artistic collective Flesh System with the intent of collaborating with other independent artists. In the frame of Flesh System, she co-created the duets “± 30 we are here for you” and “Once/Twice Simultaneously” with Przemek Kamiński. She's a member of Centrum w Ruchu – an association of independent dance artists based in Warsaw.
korinakordova.com

Agata Siniarska, fictional character with many talents and a criminal past, consciously happening chapter after chapter inside the choreographic frame, dealing with the idea of femme female impersonation. Giving chance to different kinds of theatrical forms, currently she studies choreography in Berlin, still she doesn't forget past experiences and desires towards language and writing, cinema and animation. Addicted to fiction, she makes her investigations between life/death in image and life/death outside the frame, fashioning herself as tools of visual rhetoric, through the cultural structures. Every image, fueled by the energy of profound theoretical hesitancy, she makes with passion and intense fascination. Many times not alone but with exquisite adventurers.
cargocollective.com/agatasiniarska