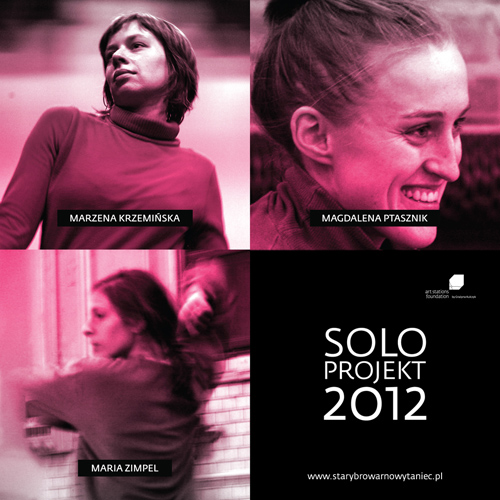 Solo Projekt is the first in Poland residency program created by Art Stations Foundation in 2006. Its mission is to support Polish dance artists in their search for individual artistic language. The project's main stress is put on the very process of creation and the artistic experiment, with the hope that this will lead to an attempt of reflecting over the art of dance and, perhaps, to redefine the very concept of contemporary dance in the search for the means of physical expression. With this idea in mind, we have decided to emphasize not so much the idea of “spectacle as a product” but rather focus on the creative process and, consequently, to support the young participants not only on production side but also by professional artistic assistance during the process. This has led to 17 different spectacles being produced at Stary Browar as part of the program within the period of the last years – each operating on completely different aesthetics and representing individual interests and personality of particular choreographer.

The program is directed at professional dancers and beginner choreographers whose interests reach beyond the traditionally understood “dance theater”. The program's motto are the words of an English choreographer Jonathan Burrows: “One needs two legs, two hands and, most of all, a head to create a dance.”

In 2012 the artistic coach of the residents will be Ria Higler, choreographer and pedagogue of School for New Dance Development (SNDO) in Amsterdam.

Ria Higler is a performance artist, choreographer and since decades a staff-teacher at the School for New Dance development (SNDO) in Amsterdam.

The SNDO is an international School for choreography. It is a challenging 4-year program for young artists who want to design their own language in dance and become independent artists who contribute to the dialogue about dance and performance in the professional field. Ria Higler was co-director of the SNDO from1989 till 1998.

Ria has studied and developed further a range of approaches and techniques to increase body awareness and the body-mind connection as a tool to enhance the creative process. Her work as a teacher and choreographer/performer has brought her to many countries all over the world and apart from Western ways of working, she adopted and integrated views and knowledge from the East as well. Specifically the ways to connect with and reflect on information we can receive from the body. In the last years Ria Higler has been one of the main performers in a 6-hour performance by Ibrahim Quraishi “Wild Life Take Away Station”.

It has been a great pleasure to work with Marzena, Magda and Marysia in this year's Solo Projekt. The process of creating a new work brings along the need to challenge what is already known, and to investigate unknown area's as well. This can be frightening and frustrating but also magical! In my job as a witness and coach I have seen it all!
Each of the 3 choreographers have taken on this journey in their own individual way, with the result of clearly different questions and approaches, which revealed the specific characteristics of each work. 3 new solo's are born and I wish them to flourish and grow in the exposure to, and the attention of audiences.
Ria Higler

Marzena Krzemińska choreographer and performer who graduated from the SNDO (School for New Dance Development) in Amsterdam and the Theatre Academy in Warsaw where she studied Theatre Science. A main focus in Marzena's work is to construct work on a high energy level. The tension and explosion of energy are important tools used in her pieces to deconstruct the images, stereotypes and clichés that overwhelm our imagination. Marzena has worked as performer with choreographers like Deborah Hay, Benoit Lachambre and Rob List, as well as choreographer’s assistant with Maria Hassabi in New York and Jeanine Durning in Amsterdam.

Marysia Zimpel studied dance with Gill Clark, Rosalind Crisp, Isabelle Schad a.o. Running, swimming, release work as well as somatic work were extensively present in her dance education, and still are in her dance practice. She studied contemporary dance, choreography and context at HZT, UdK in Berlin. At the Adam Mickiewicz University in Poznań, Poland, at the Department of Cultural Studies, she defended her thesis: “Dance practice – mobile space of creating of the self”. She has performed her works in Berlin, Vienna (ImageTanz 2011), Poznań, Amsterdam. In 2010 she has joined the Vienna based performance collective God’s Entertainment, with which she performed until 2012. She was invited by Kattrin Deufert and Thomas Plischke for their project “(En)tropical Institute” which took place in Berlin/UferStudios in May 2012. She also dances for Isabella Schad taking part in her choreography “Music”, and her current production “Experience#1”.

Magdalena Ptasznik performer, choreographer, graduate of School for New Dance Development in Amsterdam and Sociology at Warsaw University. She started her dance and performance practice in Warsaw where she studied with Anna Godowska and participated in many workshops. In 2007 she obtained a diploma of Contemporary Dance Instructor (Mazowieckie Centrum Kultury, Warszawa). In 2010 and 2011 she did a choreographic internships with La Ribot and Meg Stuart. In 2011 she received the danceWEB scholarship which take place in the frame of ImPulsTanz Festival in Vienna. She is the author of mainly solo works ( eg. “exercises for a Hero”, “secrets”). Nowadays constantly on the way, without home. She thinks about choreography as a tool for facilitating creation of different experience of time and space. She considers the body as a vehicle of this experience.