Workshops for children and their families. 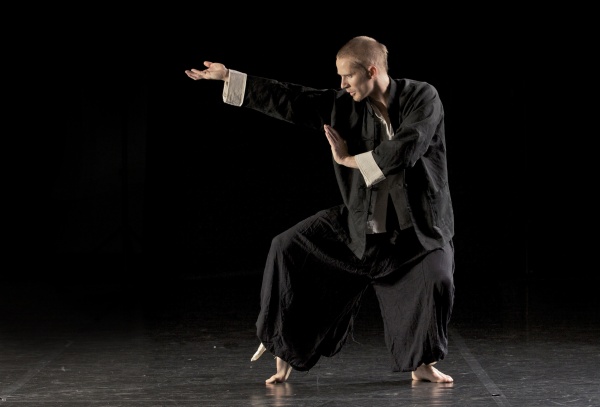 Kacper Lipiński is the creator of the F.G.D (Fight Gravity Dance) movement system, which combines the experience of movement with the principles of operating one’s body, used in contemporary dance techniques and widely-perceived martial arts. His classes bring together strength and the freedom and beauty of dance. Soft Force is a workshop which debunks stereotypes about the body of a fighter and that of a dancer. Families who will take part in the workshop will have the opportunity to depart from the traditional divisions within a group. The instructor will show them how strong girls and women can be, how beautifully fathers can move or how much grace there can be a dance-fight between a father and son. During the workshop, fathers can work with their daughters and boys can see that fighting does not mean violence but beauty; mothers can get the chance to feel strong and fathers to feel relaxed owing to the dance-like character of martial arts.

Kacper Lipiński is a dancer, printmaker, designer and photographer. Initially, he practiced martial arts and worked as an instructor, before coming into contact with contemporary dance and completing a two-year instructor’s course in 2003. From 2004 to 2008, he worked with the Polish Dance Theatre, first as an adept and then as a dancer. He also studied at the History of Arts Faculty of the Adam Mickiewicz University in Poznań. Concurrently to his studies, he began a career as an interior, graphic and stage designer, which caused him to transfer to the Faculty of Graphic at the former Academy of Fine Arts in Poznań (now: University of Arts in Poznań). There, he obtained his BA in 2006 and, in July 2009, his MA diploma which included a movement performance art piece called A słowo ciałem a z ciała słowo, presented in the Old Brewery New Dance performance programme in the same month.
Kacper Lipiński debuted as a choreographer with the independent production solocIME EKTASI, which also premiered in Poznań’s Stary Browar, in the series Co z tym tańcem?, in October 2007. His latest solo performance wOkOłO was created as part of the Rezydencja/Premiera residency programme in Klub Żak in Gdańsk (artistic mentor: Trajal Harrell). It premiered in June 2013, during Gdańsk Dance Festival 2013.

In the years 2011-2012, Kacper was a scholarship holder of the Arts Stations Foundation educational programme, the Alternative Dance Academy in Poznań, during which he also took part in workshops dedicated to the creating of choreographies for children. Since 2008, he has been a member of Movements Factory, a collective founded in Poznań by Iwona Pasińska. Since 2011, he has been teaching and developing his own movement system, F.G.D (Fight Gravity Dance), which combines the experience of movement with the principles of operating one’s body, used in contemporary dance techniques and widely-perceived martial arts, in addition to performance enhancing exercises typical for warm-ups and sports practice.