Weronika will run class on Monday the 17th of October at 6p.m.

Entry tickets available before classes at the gate of Słodownia +1.
Please remember about comfortable outfit!

Since October 2014 your favorite Monday dance classes return led by choreographers and dancers associated with the Old Brewery New Dance program. Physical activities do not require professional preparation. They are open to all lovers of contemporary dance! 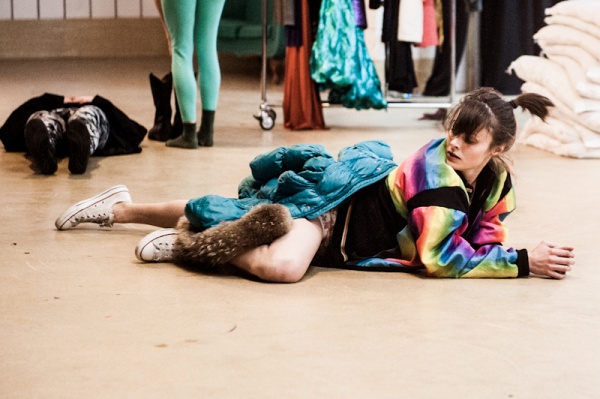 Weronika Pelczyńska is a dancer, choreographer, and culture manager. She graduated from the Experimental Academy of Contemporary Dance (SEAD) in Salzburg and from the Warsaw University of Technology. She gained professional and stage experience at the Studio Buffo Theatre and Anna Piotrowska’s Mufmi Dance Theatre. In 2008–2009 she performed with the Bodhi Project in Austria, Germany, Italy, and Poland, collaborating with such choreographers as M. Kejzare, J. Nelson, R. Hayden, E. Braun, and S. Sandroni. In 2009–2012 she performed in The Right Hemisphere, a choreography by Marysia Stokłosa, and collaborated with the Mouvoir company from Cologne on Under Green Ground. In 2011 she worked as a guest performer in Kassel, appearing in Johannes Wieland’s Sheherazad and Jozef Fruck and Linda Kapetanei’s 1000 years of sorrows. She also danced in Małgorzata Haduch’s A Great Invention for a Thirsty Theorbo, Sleepy Double Bass and Four Dancers produced by Old Brewery in Poznań as part of the programme Old Music New Dance.

In 2011 Pelczyńska premiered her solo performance Yvonne, Yvonne in komuna//warszawa in Warsaw. The piece is a remix of Yvonne Rainer’s works, devised as part of the RE//MIX series launched by Tomasz Plata and Magdalena Grudzińska.

In 2012 Pelczyńska co-created and performed in Fire is ranging in your hair choreographed by Anna Nowicka, which won the HAU award at 100° Berlin. Since 2012 she has been collaborating with the Cocoon Dance Company in Bonn performing in Replay Swan. December 2012 saw the premiere of Pelczyńska’s lecture performance devised together with economist Mikołaj Iwański and composer Krzysztof Kaliski as part of a programme produced by Bęc Zmiana and HOBO Art Foundation.

In 2013 Pelczyńska took part in A Few Steps to Lutosławski, a choreographic showcase held during LUTOSPHERES. The project was produced by the Centre for Contemporary Art in Warsaw, the f.o.r.t.e. Foundation and the Burdag Foundation. Pelczyńska presented a 10-minute choreographic miniature set to one of Lutosławski’s works. The etude’s title was Owoc natchnienia [A Fruit of Inspiration]. Still in 2013 she performed in The Waves based on Virginia Woolf’s book of the same title, directed by Agnieszka Błońska and staged at the Ochota Theatre in Warsaw. She also appeared in a film devoted to Eugeniusz Rudnik’s experimental music directed by Zuzanna Solakiewicz and produced by Endorfina Studio, which is to be released in 2014.

She was awarded the DanceWeb (ImpulsTanz) and Carte Blanche scholarships (Dance Module) in 2013. Also in 2013 she joined Centrum w Ruchu, a space for performance art in Warsaw.