Entry tickets available before classes at the gate of Studio Słodownia +3.
Please remember about comfortable outfit!

In October seniors enter for free!

Since Monday, the 5th of October, your favorite Monday dance classes return led by choreographers and dancers associated with the Old Brewery New Dance program.
Physical activities do not require professional preparation. They are open to all lovers of contemporary dance! 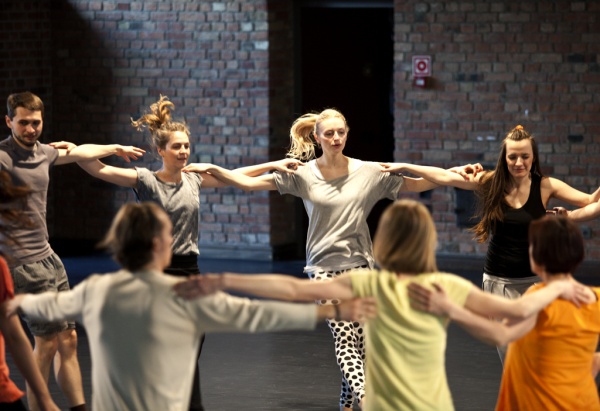 Korina Kordova is an independent dance artist based in Warsaw. Worked in her native Brazil and in Holland before joining the Silesian Dance Theatre in 2005. A member of SDT during 7 years, she worked with a number of Polish and international choreographers, performing in Europe, North America and Asia. Worked with Jacek Łumiński (PL), Anna Piotrowska (PL), Barbara Bourget (CAN), Mihai Mihalcea (RO), Idan Cohen (ISR), Kuik Swee Boon (SGP), Suzana Gomes (NL/BR) Irad Mazliah (ISR) and Helena Ganjalyan (PL), among others.
In 2006 she started creating her own work both as a freelancer and within the frame of Choreographic Laboratory of Silesian Dance Theatre. She created and performed the solo pieces "Mobile Variations" (2006), "Night" (2006), "Karolina"(2007) and "Borderline" (2010). Has also cooperated with Kokoro Dance (Kanada), BalletMet (USA), Samovarteateret (NO) and Teatr Tanća Zawirowania (PL).
In 2012, she was a scholarship holder in the Alternative Dance Academy at the Old Brewery (in the framework of Old Brewery New Dance programme) in Poznań. In the same year, after relocating to Warsaw, she started her own informal artistic collective "Flesh System" with the intent of collaborating with other independent artists. In the frame of Flesh System, she co-created the duets "± 30 / we are here for you" and "Once/ twice simultaneously" with Przemek Kamiński.
In 2013 she was granted a residency at the Old Brewery (Old Brewery New Dance/ Art Stations Foundation by Grażyna Kulczyk). In the frame of SOLO PROJECT 2013 she created the solo "on 8th boulevard. right after sinuous curves", under the artistic mentoring of Bush Hartshorn.
In the same year, she was a resident in the V MAAT FESTIVAL BORDER LINE 2013 together with Przemek Kamiński. They created the duet "#abyss.witchroulette".
She's a member of Centrum w Ruchu [Centre in Movement], an association of Warsaw-based choreographers. CwR is a space for performing arts located in Poland's capital, set up on the initiative of the Burdąg Foundation. It is based in a former middle school building made available by the authorities of Warsaw’s Wawer district under the project Wawer’s Culture Sphere. The centre hosts rehearsals, workshops and previews of new shows. It has become the first successful attempt at establishing a permanent working space for independent choreographers in Warsaw.