Air Mapping will take place on 24th and 25th of Junly in The Archive Gallery (London), in the frame of Human Nature exhibition 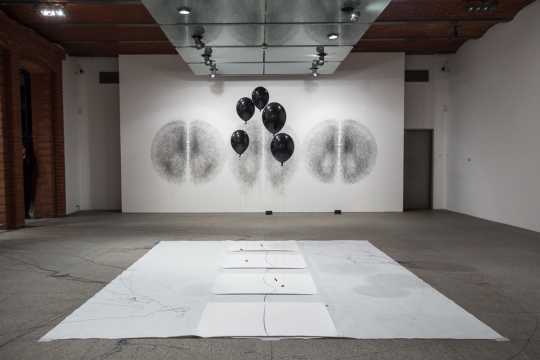 I used the residency time to continue my research from 2012 that took place in Cork/ Ireland, where I started to work with science. For the purpose of this event I chose to concentrate on chaos theory, game structure, mapping and walking art. I wanted to create a space where the input of visitors will have a visible outcome, so the Air Mapping game was introduced. It is an inter-active game for audience visiting the exhibition. Next to every art piece in a gallery, a related proposals/ instructions can be found. Through choosing one or many, the apparatus of the game is put to life. By participation, movement created by doing tasks visitors, the air movement in the space gets activated as well This event is mapped by balloons filled with helium, that have attached string with coal and thus can draw the effect on the paper lying below on the floor.

Air Mapping project was created during a week art residency for choreographers during the exhibition “For Each Gesture Another Character” in gallery art of Art Stations Foundation by Grażyna Kulczyk in Poznan/ Poland. 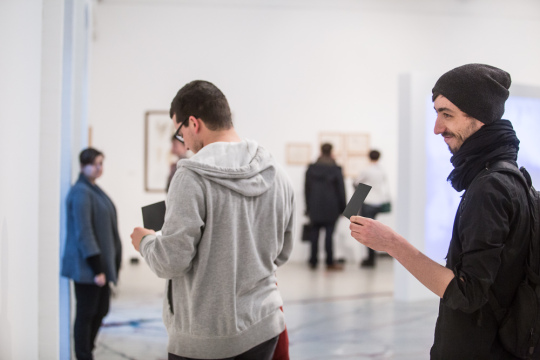 Aleksandra Borys currently student of MA Art and Science at Central Saint Martins- University of the Arts in London. Graduated from Codarts – University of Arts in Rotterdam, Holland and National Ballet School in Łódź, Poland. In 2014 artist in residence during „For every gesture another character” exhibition in Art Gallery in Poznan, there she created interactive choreography ”Air Mapping”. She received a grand “Mloda Polska 2014” for her new research on walking art, the final outcome „Movementscape” installation was presented in Poznan. Resident of SPAZIO program 2013-2014. In 2013 her project was chosen for re//mix program, to create “Unisono – re//mix Anna Halprin” in komuna//warszawa in Poland. Scholar of DanceWeb 2011 at ImPulsTanz Festival in Vienna. Scholar of Tour d’Europe des Chorégraphes in 2010/2011. In 2010 she became a holder of Scholarship of Polish Ministry of Culture and National Heritage. Resident of Solo Project 2010 at Art Stations Foundation in Poznan in frame of which she created her first choreographic work – solo “Lost in details”. In 2011 the solo work was invited for Jardin prix d’europe as one of 15 emerging choreographers with solo performance “lost in details” during the eXplore festival in Bucharest. In 2012 “lost in details” chosen for the Aerowaves Priority List and as a one of 12 works, for Polish Dance Platform in Poznan. Worked with choreographers/ artists: Aitana Cordero Vico, Marysia Stoklosa, Ugo Dehaes, Lia Haraki, Matren Spangberg, Joanna Lesnierowska, Mimosa Moize. Co- founder of Centrum w Ruchu – freelance choreographers association.
(www.aleksborys.wordpress.com)